R.C. Hoffmann (born in Karlsruhe, Germany) is a painter, software developer, multimedia artist, lawyer, musician and espresso addict. He studied mathematics, computer science, art and law in the United States (Deerfield Academy, Columbia University) and Frankfurt before venturing into a number of projects ranging from super-learning techniques for languages to oil painting, derivatives or children’s books. In 2015, he and Matthias Herrmann started Random*Source and they have been working with Serge Tcherepnin since, in order to bring the Serge Modular Music System to a new level.

Serge Tcherepnin told me that you « happen to be a really refined musician when it comes to making sounds with modules » thus would you tell us more about your artistic life? Where can we listen to your music?

Haha, this is both very flattering and kindly exaggerated from Serge! As a child, I tried to learn the piano for eight years or so without getting anywhere – never managed to get my fingers to do what they were supposed to or what I had in my head. However, I was equally drawn to Beethoven and Chopin as I was to electronic music – Frankfurt was a techno hub in the late 80s so it was hard not to be influenced by Snap, Sven Väth and clubs like “Dorian Gray“ and „Omen“. I bought my first sampler back then (Emax II) and started with Midi and sequencing. However, making music was always competing with other projects like painting or photography (rh3.de), so there were phases with varying intensity (and output! 😉 Over the years I followed the technological advances – like the rise of virtual analog synthesizers and plugins, but found that the new abundance of calculating power and infinite presets and digital possibilities actually made it harder to come up with something spontaneous or inspiring.

How were you first acquainted to Modular Synthesis?
When did that happen? When did you buy your first system?

I resisted the temptation to enter the modular world for quite a while as I was afraid that the same might happen. That did work until about 2014, when I bought a one-panel Serge system which turned out to be a revelation for me – I would spend days and weeks pathing without having the slightest idea of what I was doing – like a toddler – and was blown away by the sound, the rawness and „chance“ – the unpredictability, unexpectedness and coincidences. This led to the „Serge Frequencies“

I basically gave up any process – I would simply play around for hours without any plan or aim – and record everything. Then I would re-listen and select / cut any pieces that I found intriguing and did some (rather little) editing and layering. I extremely enjoyed being able to do what the moment or mood dictated – without worrying about title length, arrangement or structure.

Haha, good question! Realizing that the randomness apparent in any analog circuitry became more tangible than the famous „Butterfly effect“ – since then I find myself wondering to what effect such tiny, unnoticeable deviations may have in all other areas of life – whether not we constantly overestimate our own control and underestimate the influence of „chance“ or „luck“ or randomness that is not really random, but not predictable either.

How come you got so enthusiastic about Serge’s modules that you founded a company to manufacture them?

I guess I’ve been intrigued by the combination of aspects that in my eyes make the Serge system quite unique: on one side the what I call the „stomach“ approach – seemingly simple, yet extremely deep modules where you don’t have to think, but can simply play and enjoy the pure and raw sound – for me it’s close to feeling „elecrticity“. „Stomach“ – rather than „brain“ which I associate more with Buchla – as I often find that the less you think, the less analytic you patch, the better (and unexpected) the results get – Not having to distinguish between control voltages and audio for instance or about signal levels facilitate that. On the other side – and for me no less important – was the „user interface“: having the geometrical layout of the knobs and jacks with the fixed spacing and the color scheme – the „Serge grid“. 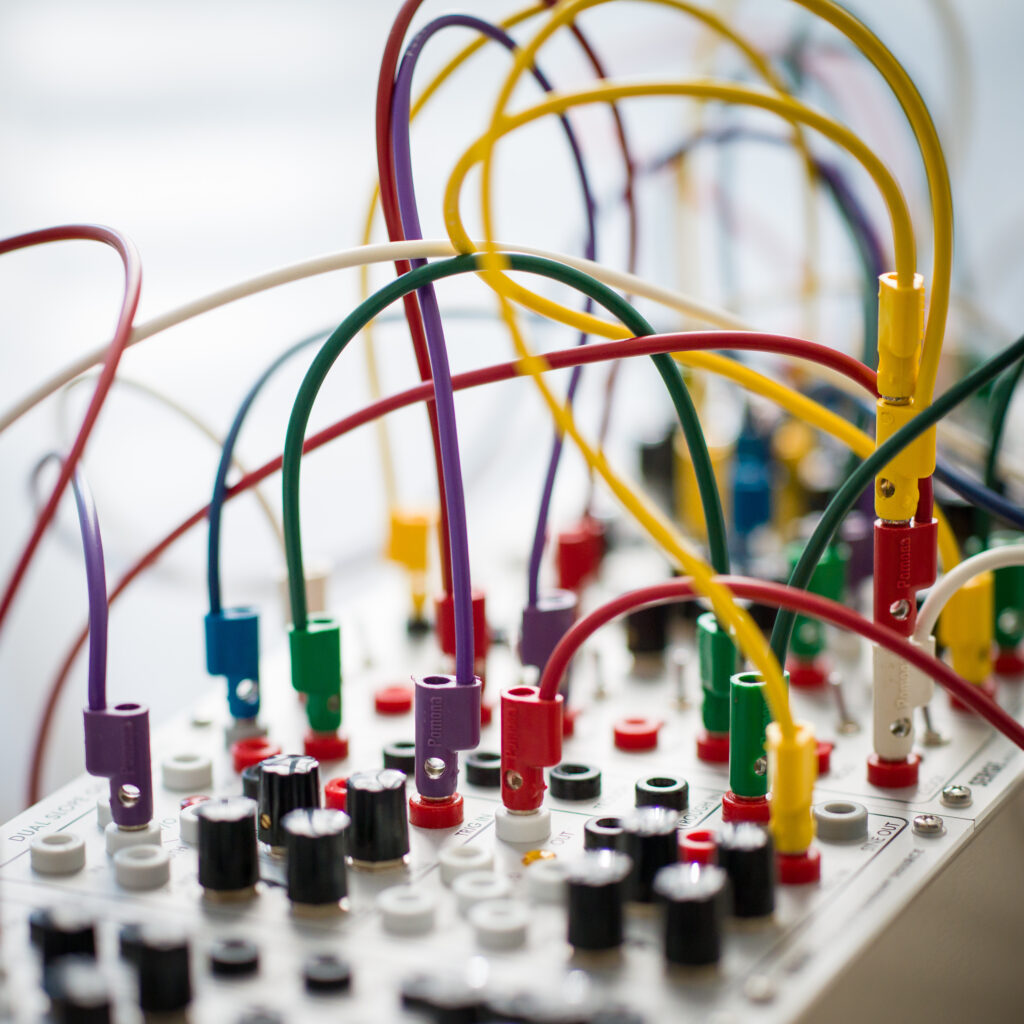 Serge’s design career now spans about 50 years. Do you still hold the same design aesthetics, ethics, goals and intentions as he did when he began?

Being quite passionate about graphic design, I was immediately drawn to the clarity and consequence of the „Serge designs“ of the various generations. Of course the design and grid had changed over time – from the original „paperface“ (invented to have generic, flexible front panels) with it’s 6 rows to the later systems with labels and 8 rows – a development that was influenced by (sometimes competing) factors like compactness / density, „readability“ of the UI elements, but also viability in terms of the space the circuitry and wiring would require behind the panel. For Random*Source, it was clear from the beginning that the „grid“ would be essential, also having a consistent color scheme and graphics. We introduced some changes like having white instead of blue jacks. This was not only an aesthetic choice (as I like the monochrome colors plus red a lot) but also because we found the blue banana jacks (from the same manufacturer) would often vary in color from batch to batch, something that might not be relevant for measuring equipment for which the banana jacks are typically used, clearly not ideal for an instrument like the Serge. When Serge and I decided to also offer a eurorack line, it was again clear that the key elements – the grid and graphics – would be even more important than in the original (4U) format: as the boom in eurorack had led to an enormous variety of designs (up to „Frankenstein“ optics) and also an enormous compactness, we wanted to make sure we develop a Serge system in 3U, not a bunch of eurorack modules based on Serge’s designs. That’s why we stuck to a strict grid in eurorack and the same knobs switches, circuits and voltage levels.

How do you work to promote his work, extend his legacy?

The key idea behind Random*Source is to preserve Serge’s designs and look and feel while transforming the electrical designs to the „now“: taking advantage of the enormous technological advances that have happened during the last decades – this allows us to use components with much smaller tolerances, less noise, faster op-amps, high performance audio parts – and of course surface mound technology (SMT) which allows us to do things in a confined space that would not have been viable with through-hole technology and hand-soldering. Our superslim panels and boats or the skiff-friendly eurorack modules would not have been possible without this.

Did you bring some modifications, variants? Which ones?

Wherever we can use modern parts or new ideas to improve the existing designs, we do it. For the new „mk2″ version of the famous Dual Slope generator for instance we managed to improve tracking from traditionally about 1 or 1.5 octaves to about 4 octaves. We also added some temperature compensation – in combination with a substantial increase in „speed“ (maximum steepness of Rise of Fall), this lead to the DSG becoming much more of a complex oscillator / LPG / audio module. For the new TKB we introduced a number of improvements and small, but powerful changes – from „glide“ (portamento) over increased pressure sensitivity to having the KEY Voltage out so precise that it now plays semitones on a 1V/OCT scale etc.

Banana or mini? The Serge world has grown beyond its banana-only beginnings. Size aside, what is your favorite plug? Is it an issue of sonic quality, patching ease, going with the flow?

Haha, that’s a tough (and very personal) questions! I still have a preference for banana jacks (and the Pomona cords), but I also like the euro grid a lot – having 5 rows rather than 8 is sometimes an advantage and the eurorack spacing is very nice, too. In fact, we have some people who prefer the eurorack grid over the 4U one. Sound- and circuitry-wise there is no difference – it’s really just about haptics and maybe what one is used to. Re ease of patching I find the banana (Pomona) stackables hard to beat – but in either case stackables are pretty essential for the Serge experience.

From a pure aesthetic / design point of view, the early paperface graphics are gorgeous – however, for someone, who actually want to use it as a musical instrument, the subsequent changes make a lot of sense. Going from 6 rows to 8 rows mathematically means an increase of +33% instrument without changing the size of a panel – or having 3 panels instead of 4 (25% reduction in space). For someone touring / traveling that’s not a minor difference. Also, having labels makes it possible to add new features – like the new sine(oid) outputs in the DSG XL that anyone understands instantly. All in all we are very happy with the current version of the design / grid and believe it will stay like this for a long time. 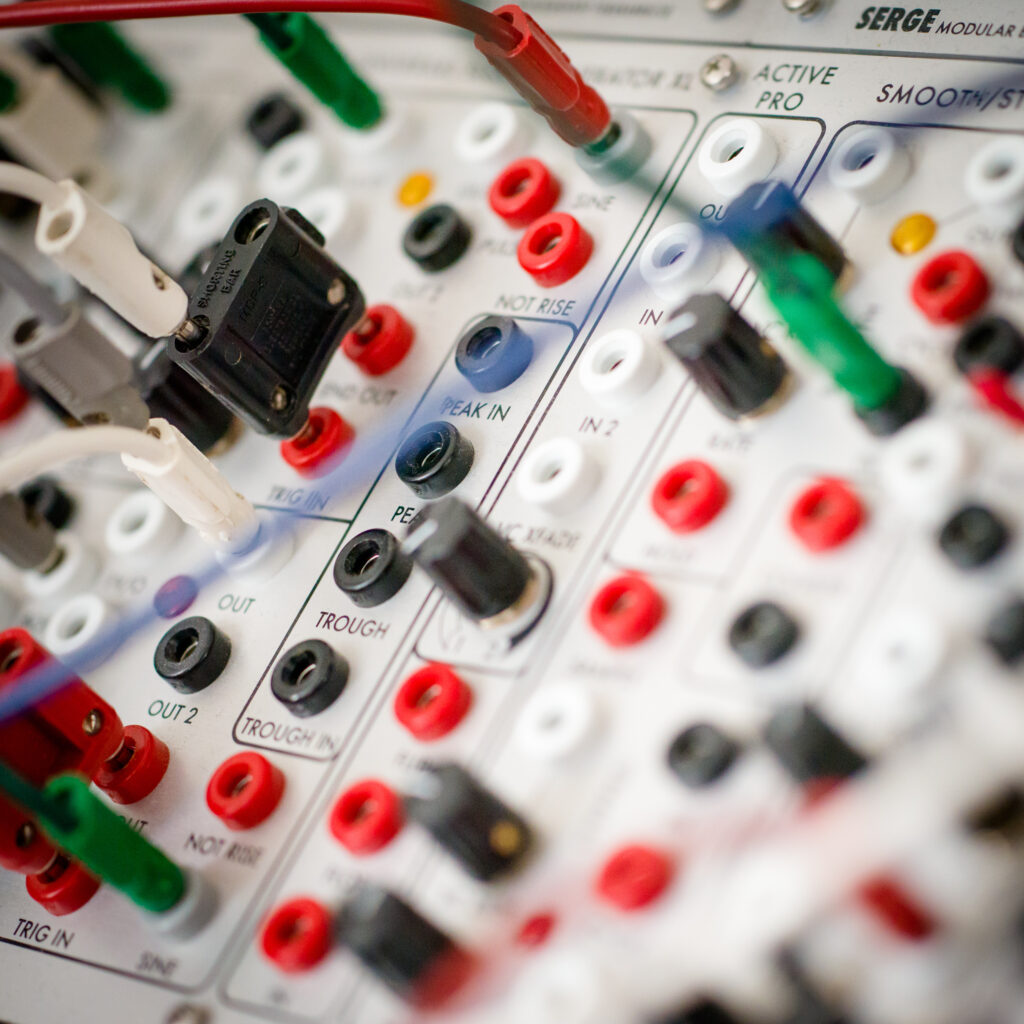 More than by any other group of people but Don Buchla, Serge Tcherepnin has been revered by the musicians that have used his systems for decades and by the new users who find them equally inspiring and productive today. And I know that the love and support is not lost in the other direction either as Serge
Has well demonstrated over the years. Because of all of this there is a real “Serge” community. Do you have any thoughts on how we can best help the Serge community and Serge legacy grow into the future?

Indeed, thanks to those musicians the Serge system survived over the past decades and it’s one of the most rewarding aspects of the Serge project to receive emails from people who have had their first Serge system in the 80s or even worked for SMMS back then and their enthusiasm about the system is as great as ever. I believe it’s really about music and sound, not about boxes and knobs, so having people like Hainbach or Ben Edwards / Zach Condon making music on a Serge system is the key to growing the legacy.

Are you designing anything new now, or investigating any areas of interest that you can share with us?

The latest additions to the Serge range are a Dual PCO and the upcoming Crocodile panel. „Crocodile“ is a good example of the way things evolve – based on a TKB + Mantra combo Matthias (Herrmann) had built for the last Superbooth as a compact kind of Serge „Easel“, the response was so great that we started thinking about what an ideal TKB-companion could look like … and how we could fit everything on our whishlist (TKB, Quantizer, waveshaping, precision CV mixing for tonal use) into a single panel. This lead to some new modules / combinations like a „special” version of the NTO that offers VC controlled wave-folding based on either the SINE output or the VARIABLE output (or anything in between). Since the Variable OUT is also voltage controlled, this allows controlling the folding / waveshaping through 2 parameters. The Portamento we could trade in for this as the new TKB already offers „glide“… And then we are working on a couple of other things that we find extremely exciting, but it’s too early to dive into this yet. Only a hint: one of them falls into the area of rhythm …

To know more about Random Source