I am Philippe Petit, this is July 2019 and I bought my very first modular synth in March of this same year: a glorious Buchla Easel K. This live recording was improvised playing on it, sometimes thru the Fuzz FX of the Eventide H9 Pedal, or a Moogerfooger Ring Modulator… Analogue synthesizer chips, components and circuits typically leave their mark on the signals that run through them which is why I tried to keep the instrument as natural as possible since its sound is close to perfection.
Besides I like its immediacy: plug, patch & play…
Random, non-linearity, flexibility, physical accessibility of parameters and the kinds of interface and workflow that modular systems allow are what interest me, gesture/movement being of the highest importtance. A modular analogue system also typically has no recallable memories so is by definition useless for much stage use. The means of control, for example via potentiometers, knobs and joysticks, are often neither particularly linear in implementation, nor appropriately scaled and are famously difficult to set in exactly the same positions more than once.
Playing becomes highly visceral, personal and poetic!
Everytime some new surprises…

Even if I have been a fan of electronic music since the late 70s after seeing Kraftwerk perform live, and even if I have relied on synths or computer synthesis for years I only became fully aware and using Modular Synthesis in my compositions after Pascal Gobin, my Electroacoustic teacher from Marseille Conservatory of music, introduced me to the RSF Kobol Expander in 2018…

I started to create “Plastic sound-objects” playing a Theremin, Soline and Roland Fantom G6 synths, as well as with my computer and lotsa plug ins such as GRM Tools… Then trying Moog, Kobol, ARP, and finally bought my BUCHLA Easel K in April 2019.

I have been a turntablist for decades and obviously to me movement/gesture is of the utmost importance. Thus I love the immediacy of my Easel, I really feel like a sound-craftsman who puts his hands in the grease and sculpt sound…
On an existential basis it is like a drug and I am totally addicted… 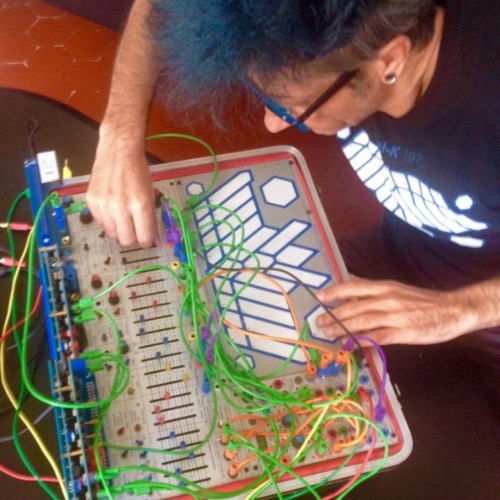 It is opening so many doors of perception, giving the ability to change your sound which is why one can easily feel attracted by new modules, and besides nowadays there are so many temptations all over the place…
Nevertheless I do believe that it is necessary to fully explore each before falling into this trap of temptation, overconsumption and most importantly better compose/create music than gathering new instruments.

Obviously there are many, but in priority I’d love to drive a Buchla 200 or a large Serge systems.
But first I shall fully explore the one I have. I am expecting some extension cards from Portabellaz: the EMS Synthi VCS3, as well as their Toolbox and BOB Expander. Besides Guy Drieghe is building a Meta Expander which shall complete the power of my Buchla.

I started to improv playing my Buchla Easel K with its AUX Card + sometimes thru the Fuzz FX of the Eventide H9 Pedal, or a Moogerfooger Ring Modulator…

Precisely from the left of the Easel there is:

A 5 step sequencer that can be clocked by the keyboard or the pulser (envelope decay only).

An Envelope Generator (Attack, Sustain, Decay) with Transient, Sustained or Self mode selection. It can be triggered with the keyboard, the pulser or the sequencer.

The pulser that is controllable in tension. It can be triggered with the sequencer or keyboard or self-cycle.

The Modulation Oscillator is a VCO offering the modulation bus (ring mod, AM, and FM Lin of the complex osc) modulation index from the modulator to the complex, input expo controlling Modulation and Frequency. Keyboard on / off, waveshape (sine, saw, square).

The Complex Oscillator VCO to control pitch, timbre (triple wavefolder), switch to choose the waveform for the crossfader (crossfade between the sine output of the Timbre Waveforms and the waveform selected on the switch). Keyboard on / off, Polarity +/-.

2 Lo Pass Gate (in parallel or in series) of which 1 is reversed in polarity to allow other types of filters.

Also I have control of préamp, reverb, inverter, monitors and I could patch 4 S/H being clocked by the keyboard or the pulser…

Adding the Buchla Music Easel Aux Card, modulation can be achieved directly through. It also features a digital oscillator/LFO, which can act as a reference oscillator for tuning if needed, and filterable noise. Three CV inputs including attenuators allow for CV control of the “Attack”, “Decay” and “Sustain” parameters of the Music Easel envelope.

Two additional switches on the Aux Card allow you to use the “To Card” input in the envelope detector section of the Music Easel to switch through the waveforms or modulation types of the modulation oscillator, to select Gate 2 Source, or to change the modes of the lowpass gates.

An internal digital oscillator/LFO can be controlled either by CV, internal bus, Music Easel sequencer or the Pressure CV of the Easel. It offers the CV-controllable waveforms sine and sawtooth as well as a pulse wave with PWM. The audio signal from this oscillator can be mixed with filterable noise. Both the mix and the filter frequency of the noise are CV-controllable.

Regardless of the mix or LFO settings, a blue banana jack always outputs the pure oscillator/LFO signal without noise. At another audio output there is either the Noise/Oscillator Mix or, in LFO mode, only the noise signal, present.
An input titled “Pulse In” can be used via switch to trigger either sequencer, envelope or pulser.

And last but not least “for a long time Buchla would simply refuse to add a keyboard to his instruments. According to him, the synthesizer should be… a tool for music and experimental musicians. A keyboard would be an invitation to the conventional scale set…” My model comes with Multi Dimensional Kinesthetic + Tactile Port which allow to control in a really experimental way. Not a keyboard at all, a controller.

Easel which in English refers to the painter’s easel. A painter uses an easel to support the canvas on which he creates his works. So the Buchla Easel is the ideal support to hold a canvas on which I want to create my sound paintings. 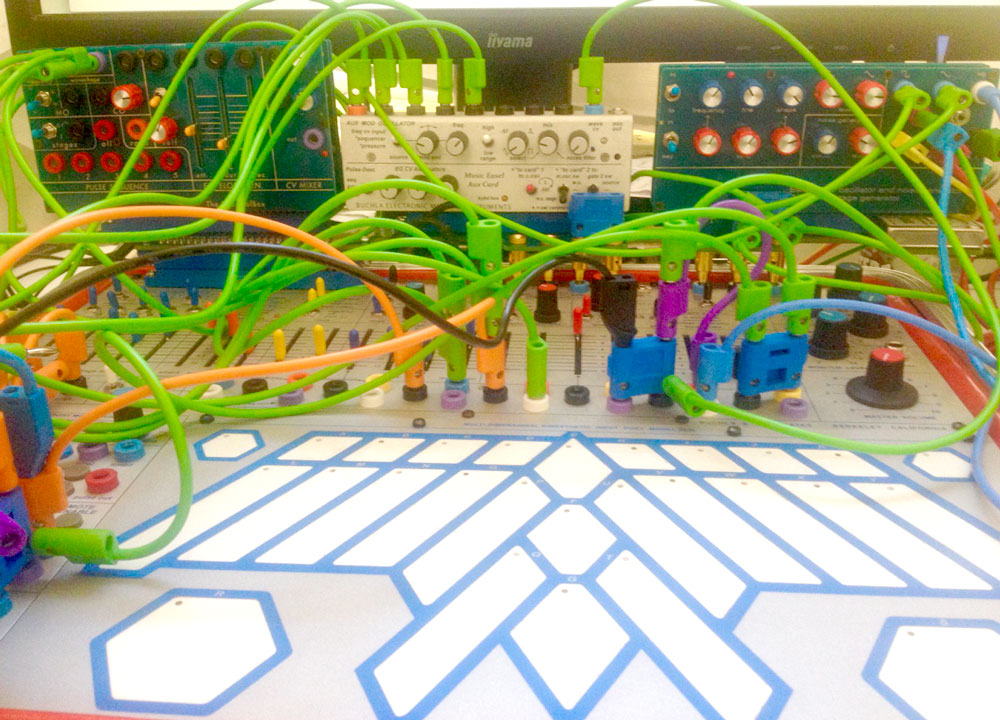 Morton Subotnick’s first 7 albums for sure. Also of importance the works from GRM composers using the modular built by Coupigny and above all Bernard Parmegiani. Those 2 were so innovative and brilliant, chosing to follow their own path, create a unique alley no matter what, and interested in sounds whose origin cannot be guessed at first listen and this is an influence.
I have started a series of mixes: Early ElectroMIX sharing the works from some pioneers:

Any advice you could share for those willing to start or developp their “Modulisme”?

Be open-minded and ready for unexpected adventures… 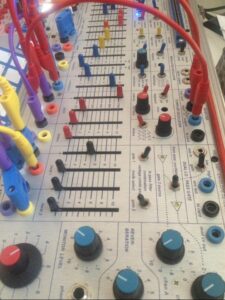