Ophir Ilzetzki (*1978) is a classically trained composer of experimental music living in Tel Aviv, Israel. He holds a doctorate in music from the Southampton University, where he studied under Michael Finnissy, as well as an MMus from the Guildhall School of Music & Drama, and a BA from the Koninklijk Conservatorium – both in composition.
Ilzetzki’s music explores various forces through instrumental, electronic, computer, performance, task and conceptual scores, where his works often research the intersection between through-composed and improvised pieces. Ilzetzki’s ongoing compositional goal is to strip forms to their bare essentials whilst still maintaining their identity. In recent years Ilzetzki has been applying games to musical structures, as well as focusing on alternative avenues for scoring music – an activity often leading to the meeting of music with dramaturgy.
Ophir’s music is regularly performed in Israel and abroad, and has been featured in numerous international festivals, such as: Tectonics, MATA, Norwich and Norfolk Festival, ACL Asian Music Festival, ISCM World Music Days, City of London Festival, Israel Festival, and more.
His works have been published by: Open Source, Stenton Press, Classwar Karaoke, Surrism Phonoethics, False IND…

Years later, when already in the UK, I wrote a piece called “Aleph”. Some of its materials were devised by my friend, Tomer Harari, in BEA5 (the analogue studio for the Sonology department in The Hague, which was even better equipped than the composition studio – BEA1). With those raw materials and some of my own I composed Aleph – an incidental music for a dance piece choreographed by Bryony Perkins.
Another electronic piece from the UK days called Seed features a nice little synth i built in Max/MSP. And my first ever attempt at electronic music is Tongue which is based entirely on recordings that haven’t been manipulated in any way other than editing. That’s my entire solo electronic oeuvre to date – the rest include some kind of combination of acoustic instruments and live/electronics.

I was acquainted with modular synthesis during my studies at the Royal Conservatory in The Hague. There was a composition studio there – then it was simply called BEA1, but today it is called the Karlheinz Stockhausen studio. It featured all the major instruments for electronic music creation since the early days of electronic music. The first instruments were measurement instruments, but soon they became dedicated synths and primitive computers up to the era of digital equipment. As composition students we were encouraged to spend time in the studio and play around with the instruments, and that is exactly what most of us did. Although I recorded many of the sessions there, I don’t think I ever used any of its materials. My favourite instrument of the lot would have to have been the ARP3 synthesiser and the primitive yet highly effective octave filter. The early Moog version featured in the studio didn’t have a keyboard, and I remember I never really managed to figure out how to make it work. I hope to one day visit that studio again and see whether I could get it going now.

When did that happen?

My first and only system was bought in parts during 2017. I first started with the Monotron Delay, and slowly acquired all the rest. The occasion was an idea my friend and colleague, Daniel Meir, had. He was invited by Ilan Volkov to perform at the Tectonics festival that same year, and he asked the late Uri Katzenstein and me to join him. His idea was for us to all play small, inexpensive analogue instruments. By November of that year, the system was already complete and it was with this system that we performed and indeed the one with which I later recorded the symphony.

I had to learn how to use them and I remember being amazed at how rich their sound was and how delicate their state – it was impossible to return to a specific knob setup or moment or sound, and I slowly realized that these sessions need to be recorded. And so I did, which meant that by November of 2017, the date of our Tecotincs performance, I had loads of recorded material – a consequence of the hours I spent improvising and trying to learn how to master these instruments. With some of these recordings I later created the soundtrack for the Crowe&Rawlinson film, Song for Armageddon, and was still left with tons more, some of which I used to create the symphony. By the time I recorded materials for the latter, I was already quite proficient with the setup, and was able to recreate states, as well as return to entire musical structures I had achieved in previous session. The dedicated recording for this program, for instance, is a live rendition of the first movement of the symphony – God Sent. It was recorded at a live concert at the Hanut in Tel Aviv, and funnily enough, it is an attempt to recreate the home-improv that later became the first movement of symphony, and not the other way around.
The main thing that changed in my compositional process was that usually I tend to begin my compositions from abstract ideas, which later become musical materials. In this case, it was the materials – a consequence of improvisation – that were the basis for the future compositions. There was something quite liberating about creating compositions this way; in fact it was so much easier than my usual process that at first I felt as if I was cheating. But that feeling gave way to the joy of exploration and experimentation. 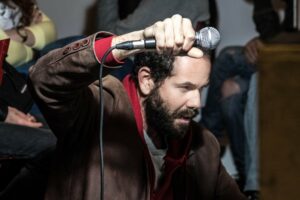 I explain that by the fact that many people are bonded to their equipment as their only means of creating music, sound or compositions. Finally, even the most delicate and intricate instrument feels as if you’ve used it to its fullest, which prompts you toy buy a new one, or find a different way of connecting it to others. Even I, in the short time I spent with these synthesizers, could see how they are eventually limited and require a pretty basic technique to be used. So I guess in the same sense that I feel that I have depleted the options for this setup and really have explored it in the best way I personally can, I imagine someone else wanting to get more instruments that could allow more options. For me this was just another instrumentation, which I really enjoyed using and I might enjoy using again, but I have already moved on to my next project, which is a theatre piece for saxophone and actor. But if you think about it, I’ve been working on this project for two years now, and the work on the symphony took almost two years as well. I guess that I like to feel that I’m inventing myself anew with each new project, and adding another instrument or knob simply wouldn’t do it for me. But hats off to those who stick to it – I have total respect for people who exemplify amazing technique on these kind of instruments – it’s super impressive!

All tracks for the symphony were composed and mixed using the same instruments, but each track featured them connected differently. I can’t tell you exactly how they were connected for the 1st and 3rd movements, as I simply don’t remember. But for the 2nd and 4th movement there was some kind of feedback loop using the SM58, and for the 4th I used a no-input loop between the 3 Monotrons.
These were the instruments:
Korg Monotron, 2xKorg Monotron Delay, Korg Volca Keys, Noizumashin Mole-Rat, Apple iPhone 4 & Shure SM58.

Not really. To be honest, I have no idea what’s going on out there these days. I mainly focus on my own music, and listen to music people send me when they do, which isn’t that often.

Dick Raaymakers for many of his works, but particularly for Flux (1967). It is perhaps the first ever attempt at no-input mixing, but Raaymakers doesn’t suffice with exploring the act itself, but through it created materials that he carefully and expertly edited into one of the most exciting pieces of electronic music I know. by the way – he created that piece using the mixing desk that later found its way into the BEA1 studio in The Hague, where my first attempts at modular synthesis happened. I also really love Ariel Martinez’s, El Gloton de Pepperland (1970) – a modular piece that crafts very simple oscillator sounds into a beautiful dramatic musical form, including one of the most inspiring coda’s ever.

Record everything, and experiment. As soon as you’ve figured out how something works, connect it in a way that is new to you or find some unidiomatic avenue to explore it. I felt that the sessions where I didn’t really know what the instruments are going to do, and where I was experimenting, brought the most interesting musical results. 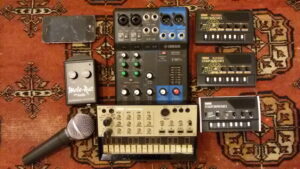