Ben Carey is a Sydney-based composer, improviser and educator. He makes electronic music using the modular synthesiser, develops interactive music software and creates audio-visual works. Ben’s research and practice is concerned with musical interactivity, generativity and the delicate dance between human and machine agencies in composition and performance. He has released four albums; ANTIMATTER (2019, Hospital Hill Records), derivations | human-machine improvisations (2014, self-released), Ben + Zamyatin (2013, Not-Applicable Records), and Wingello Sessions, (2014, self-released). His work has been performed and exhibited at numerous festivals, conferences and events in Australia, New Zealand, the USA, Europe and South America. Ben completed a PhD in interactive musical composition at the University of Technology Sydney in 2016, and is a Lecturer in Composition and Music Technology at the Sydney Conservatorium of Music, University of Sydney.

I recently completed a residency at MESS Ltd in Melbourne, where I spent time with an enormous 12-panel Serge Paperface system from 1975. I’m currently working my way through the recordings from this residency to sculpt them into a future release. I’m also working on some performance and recording projects with vocalist Sonya Holowell as part of our duo ‘Sumn Conduit’. Aside from this I’m working on some ideas for a piece for string quartet, modular synthesiser and audio-visuals planned for 2021.

I came to modular synthesis about 4 years ago now, having been curious about analogue synthesis for a while. My background is as a saxophonist, but I’d been making generative and interactive work in MaxMSP for a number of years, especially work that involved sampling and generation based off analyses of the playing of an improviser. I guess I’d been curious for a while, as I’d been coding my own synths, sequencers etc. in Max, but I also have a close friend who had been obsessing over building up a system ever since I met him, so I was aware of modular and what it was capable of.

I bought a Moog Mother 32 back in early 2016, and initially I just wanted to pilot it via CV from MaxMSP. I loved it straight away, especially with that flexible patch bay. I also got a Korg MS-20 mini, and interfaced the two together with my laptop, but soon after I realised I wanted to get fully modular with some Eurorack. It’ll only be a skiff, I told myself – just a little system to compliment my other synths and laptop. Of course, soon after I added another 6U to the skiff, and for the past year I’ve been playing on a 12U system. 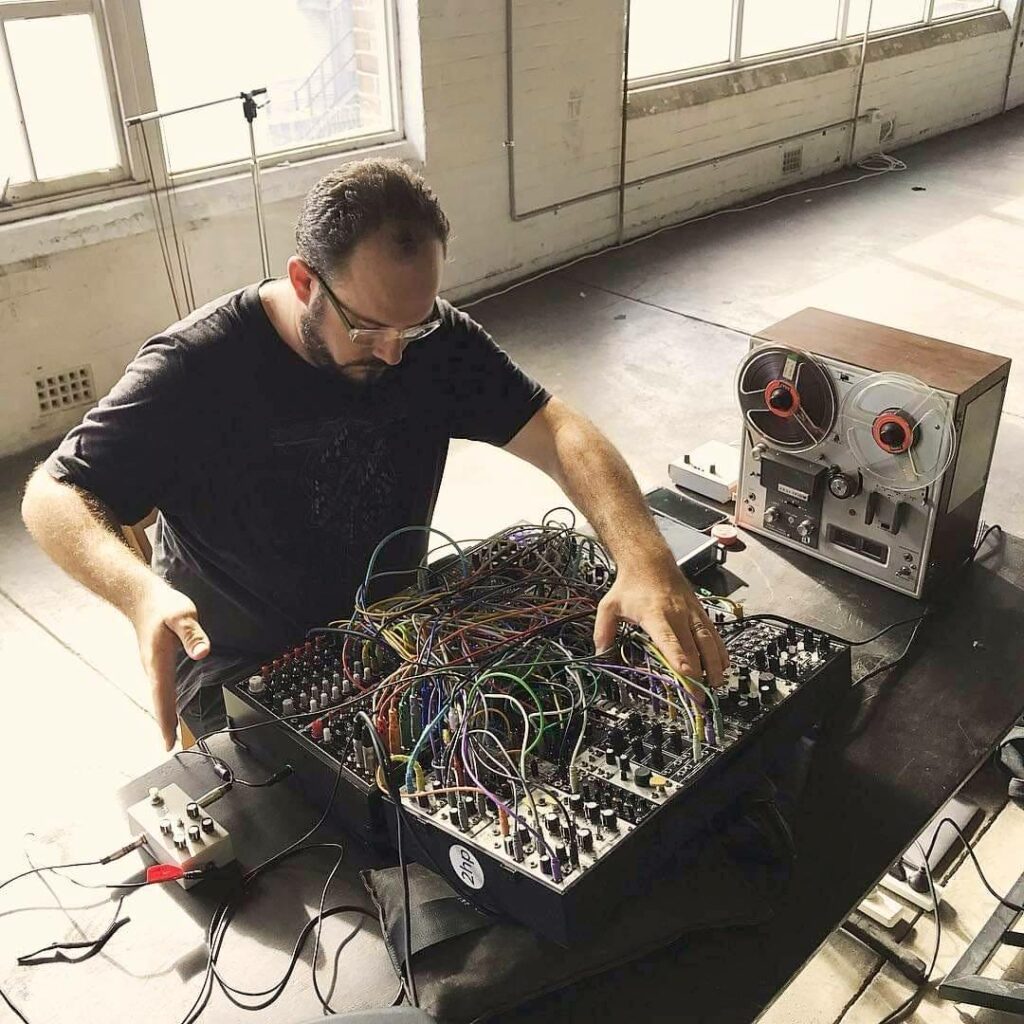 Pretty monumental, actually! I’ve had quite a gear shift in my musical work these past 4 years – no pun intended. I’ve gone from working exclusively in Max and in Ableton/Max 4 Live, to focusing my efforts on the physicality of a Eurorack system in my performances and compositions. My programming work had always been about trying to build systems that listen, and that generate material based off an improvisation. This is because, as a saxophonist, I wanted to play with electronics without having to use controllers, or to tell the computer what to do. Now, I don’t use the saxophone very much at all – I feel like I’ve been building and learning a new instrument, and a new way of thinking compositionally. I find I make music more intuitively, and I’m also quite happy spending time making sound for the sake of it – and this often leads to places that I couldn’t have gotten to by having to pre-define a musical pathway.

Well, it’s the nature of the medium I think. Within a modular system, because you’re interfacing many individual modules with each other, there’s always the temptation to be on the search for something new, something that could shake up or expand your current workflow. I think this is not only a function of the consumerist society that we’re living in, but also because the act of defining one’s own system is actually very compositional. Even if we never touch a hammer or a soldering iron, we’re all instrument builders in one way or another, and instrument building is actually quite compositional, as you’re defining your sonic palette. It’s so easy to swap things in and out, especially if you’re buying second hand and selling on old modules. So, not to excuse all the hyper-consumerism that undoubtedly goes along with the modular scene, I feel that gear lust does come in part from this quite unique dance between instrument building and composition. Of course, as with any creative endeavour, setting limits for yourself is the only way forward – my limitation for the past year has been that if I want a new module, it has to fit in my 12U system. Because it’s always full – I have to find something to sell to fit it in!

Would you please describe the system you used to create the music for us? Can you outline how you patched and performed your Modulisme session?

The recordings from my session were all tracked live on the same 12U Eurorack system, but as they were made at different points over the past year, that system was slightly different for each patch. The system is generally pretty ‘west-coast’ inspired, so I’m using random sources (most recently the Frap Tools Sàpel) for a lot of the timing and modulation, plucking oscillators through low pass gates, analogue FM synthesis, looping AD envelope generators and the like, but also some digital modules for granular, wavetable synthesis and physical modelling.
The first four tracks are all very typical of my studio workflow, and they’re quite focused on feedback as a technique. I’m a big fan of dense layering of different processes, and making as many parts of the patch contingent on each other as possible. In the studio generally develop networks of processes that push and pull on each other to create something quite unpredictable. After slowly building these patches and learning their boundaries, I recorded the results of me guiding them by tweaking things like envelope lengths, the scaling of random outputs, as well as the mix between voices.
The fifth track is quite different, as it’s based on feedback from the landscape Stereo Field – un unwieldy beast. In this piece I setup a feedback patch on the Stereo Field, and sent it through the Make Noise Mimeophon and then into the Morphagene. I recorded an improvisation by performing on the surface of the Stereo Field and tweaking the controls of Make Noise modules, especially their mix controls.
The final piece is a live performance, which is different yet again. The sound concept for this patch was based around a tape loop I made on a reel to reel, made of gritty, squealing delay feedback pitched down a few octaves. I had the long loop playing on stage, and occasionally brought it in and processed it alongside other material. For this kind of performance patch, I usually have multiple ‘spaces’ in the system I can go to, and I’m generally slowly developing material over time. Rather than focusing on one, generative process, the focus for my live sets is often on live mixing, layering and morphing from one material to another.

Well, having spent time on the large Paperface at MESS, I’m quite taken by the Serge workflow, so I guess a decent-sized Serge system would be my dream system. However, a Synthi AKS and a Buchla 200 system would also do nicely 🙂 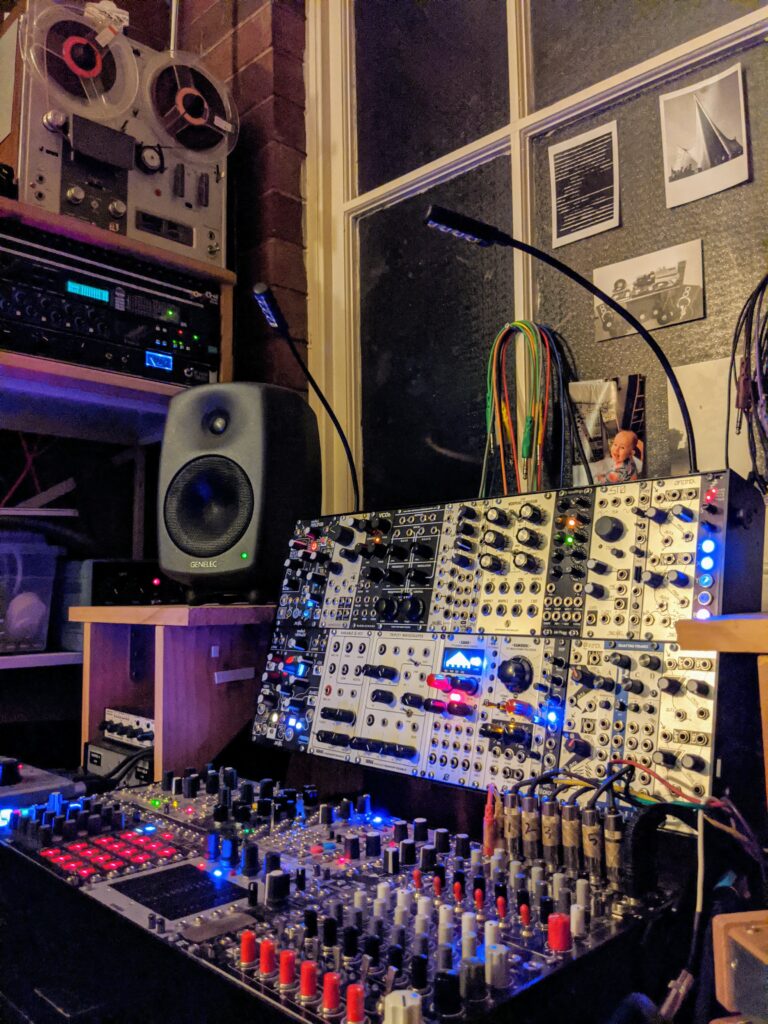 There are so many fantastic musicians performing on the modular, but I would say in particular I’m very fond of the work of Thomas Ankersmit, Bana Haffar, Tod Barton, Ben Vida, Keith Fullerton Whitman, John Chantler, Thomas Lehn and Richard Scott. Lately I’ve been a big fan of Ankersmit in particular, he has an amazing command of his Serge, and a unique ear for texture. As for pioneers and other composers, well of course Morton Subotnick’s music is astoundingly beautiful, but I would also count other musicians that aren’t modular people as influential, people like Bernard Parmegiani, Pauline Oliveros, Tod Dockstader, Gerard Grisey, John Butcher, Evan Parker, Giacinto Scelsi, György Ligeti, Pierre Henry, Eliane Radigue, Luc Ferrari, and of course Autechre.

Begin with an open mind, you might come to modular knowing exactly what music you want to make, but know that the instrument will also push back and tell you what music it wants to make. This friction is more than half the fun, for me finding a musical path is never about imposing an external idea on your materials – it’s about being in tune with what your materials are saying. With a modular system, the modules themselves impose certain constraints on your work, learn what they are, and learn how to work with them. 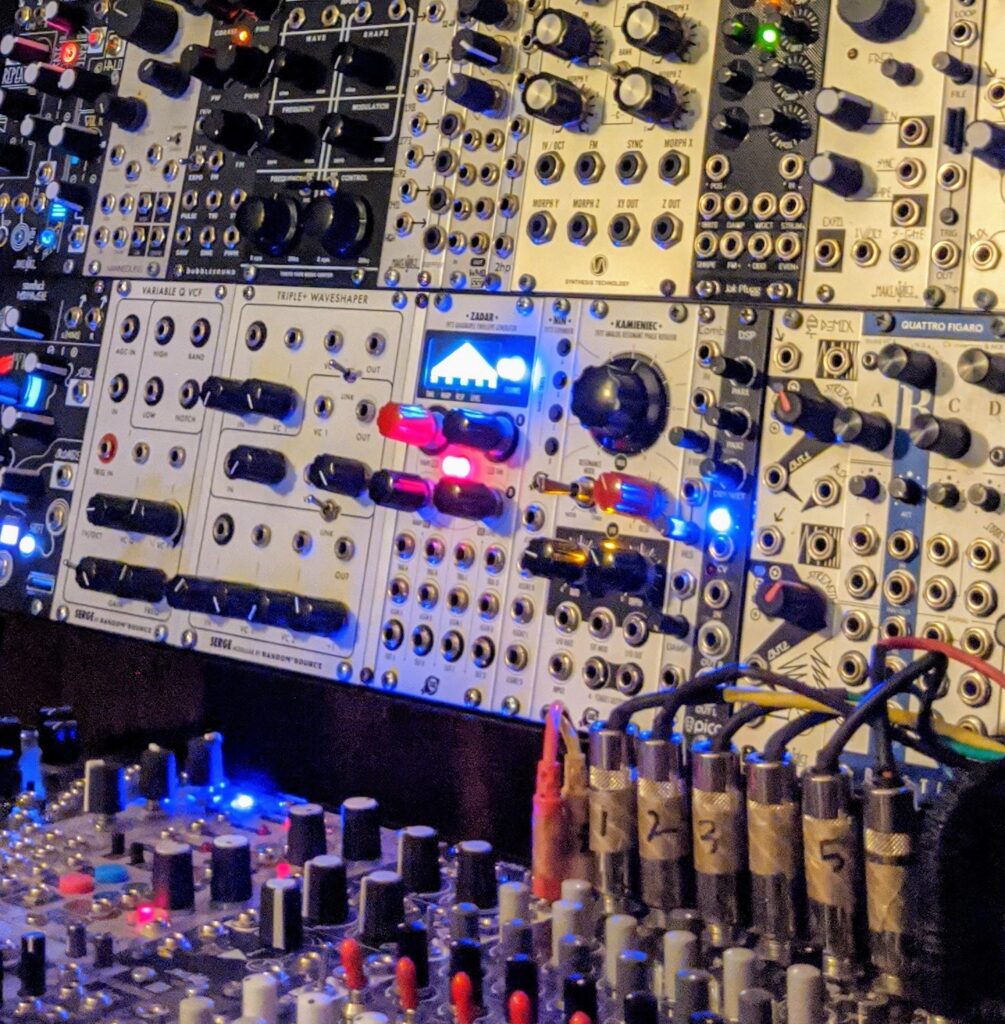