Francisco Meirino lives in Switzerland and has been doing music since 1994 (using the pseudonym Phroq for his harsh noise project until 2009). He works with (Eurorack) modular synthesizer, computer, reel-to-reel tape recorders, magnetic field detectors, piezo transducers, field recorders, and various home-made electronics.
He has performed more than 200 solo shows in various venues and Festivals in Europe, Japan, and North America ; released mainly solo works but over the years had the honor to collaborate with great artists such as Leif Elggren, Dave Phillips, Michael Gendreau, Gerritt Wittmer, Kiko C. Esseiva, etc…
Since 2009 he has been using his real name and his music changed to become less harsh noise but still pretty intense. He also writes music for contemporary music ensembles and contemporary dance and is mainly published by labels such as Misanthropic Agenda, The Helen Scarsdale Agency, Flag Days and Firework Editions.

I’ve been working since 2019 on a new solo piece A New Instability, originally a commission by the GRM for its Acousmonium system for 36 speakers, a stereo version will be released soon as an LP on Helen Scarsdale Agency.
I’m also working on a boxset of re-issues of all my solo records, that boxset will contain 4 cd’s and will be released in 2021 by Misanthropic Agenda.

In 1998 a friend lent me a Korg MS10 which marked my introduction to patching, then between 2001 and 2008 I mainly worked with max/msp and with analog synth/pedals like the Trogotronic model 666. In 2009’s I bought my first semi-modular system: a MFB Kraftwerg.

In 2013 I composed the music and did a big tour for a dance piece, I got a lot of money for it and was finally able to buy my first Eurorack system, a Doepfer A100 system.

Well, I was already aware of it, I just couldn’t afford it, I only could buy small systems like the Kraftwerg and the Korg MS20 mini.
My music was already composed in the same way but instead of having all in one case, in the same format it was going through various pedals, synths, DIY oscillators, and tape recorders, now it’s more convenient and powerful and light to carry to shows.

Every month brings amazing new modules, you buy one, then your whole system changes and very often, those open new possibilities, and well, make you buy another new module to expand even more.
It is the beauty and curse of such an open system. But, for my part, my main goal with the eurorack synth was to create a system that could do everything I was doing with my computer, pedals and tape recorders, to be able to only bring one piece of equipment to perform with, to build my own instrument.

Yes, “instrument building” is the main drive of my interest in modular. I really dislike when you can hear and tell: – “oh, I know that module !”.
Nowadays, modules are more and more complex, they are in some fact, small stand-alone instruments.
My love for modular is to build a machine that will sound like I want, which will emulate and extend my sound. I wouldn’t buy a module because it makes this type of sound, or sounds like this or that. I have some modules that I barely use because of that, like the Make Noise “Telharmonic”, or the Mutable Instruments “Rings”. I mean they sound great, but they have too much “personality” to fit in my sonic palette. For me filters are the worst, they are so recognizable, but paradoxically the only exception I can see in my modules, is the Serge Resonant Equalizer, it has its own typical sound for sure, but that one really fits in my system. 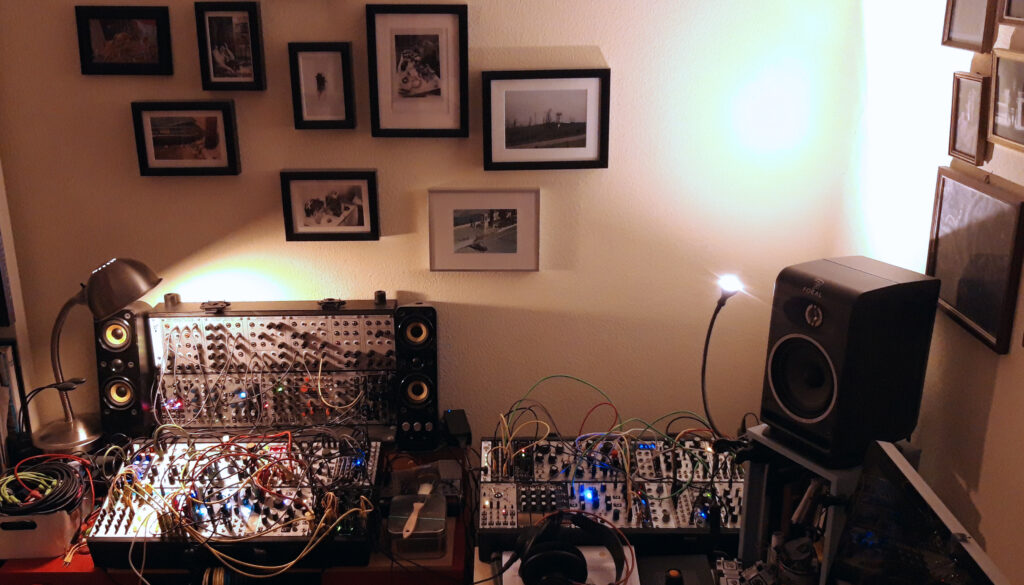 My whole system is 1 x 6U/98 hp case and 1 x 12U/98hp case.
I use the 6u case for live shows, it features 5 oscillators (each with waveshaping possibilities), 2 random voltages unit, 2 dual envelope generator/oscillator/LFO, a quad envelope generator, 3 stereo sampler, a 4×4 matrix vca/mixer, 1 effect module, 1 pre-amp module, 1 controller module and 2 modules combined to create a 13 channels mixer/auto-pan/vca.
The rest of the system, the 12U case, mostly stay in the studio it features 8 oscillators, 4 waveshapers, 3 filters, 4 random/noise, 2 effects, 3 vca’s,
4 mixers, 1 quad envelope generator, 4 samplers, 2 phasors, and one touch controller.
The patch I did for the Modulsime session is all improvised a mix of the 2 systems it allows me to let sound evolve on one system while patching the other one.
I use a lot of FM modulation with my oscillators and random values for the waveshaping, I usually trig the samplers manually with different envelopes on the left and right channels,
which helps me to create a huge stereo spread. I also use the dual enveloppe generators (one Maths and one Serge DUSG) as oscillators that I will feed with LFO (in audible range) and white noise.
I do a lot by hand, I don’t have a sequencer and most of the values change are done manually.

I am really happy with my system, I also can’t see what can compare to the flexibility of Eurorack, but if I’m honest, I’ll like to have a 4u Serge system,
I’ve been able to work on a lot of different systems all these years (Buchla, Serge, Coupigny) while working in various residencies and I really like the Serge.
I’m planning on getting a custom system in the next years.

I like the works of Jean-Philippe Gross, Yvan Etienne and Thomas Ankersmith on the Serge Systems.
I’m sorry to say that no pioneers really influenced me, but I like (a lot) works made with systems that somehow where similar to a modular synth, people like David Tudor or Gil Mellé , they both built their own electronics.

Have a precise idea of what you want to do in order to buy the right modules, spend time on modulargrid, watch and listen to tutorials.
And don’t be afraid to make mistakes, there’s no such thing as a bad module, you can always trick it and twist it to do something else. 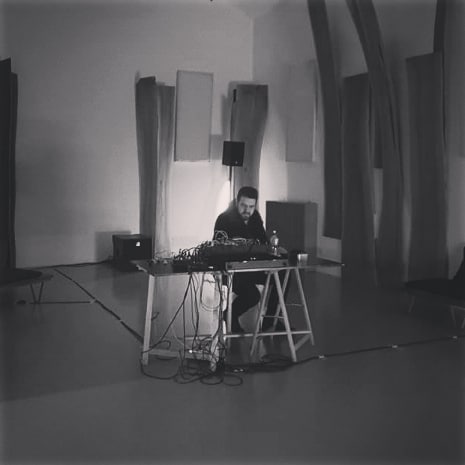