Andreas Tilliander started experimenting with electronic music and analog synths in his early teens and in 2000, being 22 years old, released his debut album on the prestigious Raster-Noton label. The following years he recorded for the even more renowned Mille Plateaux and Force Inc labels.
He’s been producing techno music as well as more laidback music, slow tracks and sometimes closer to Terry Riley.

« My love for anything dub is always present in my productions. »

This autumn will the see the return of TM404. The third album was recorded one month in Berlin last winter and now it’s time to let it out. There’s also finally an LP coming on my own label with the music me and my childhood friend Johan T Karlsson recorded together last year. We spent a week on the countryside recording. Eurorack, Elektron boxes and DSI synthesizers straight to a porta studio. Some sort of ambient with lovely melodies. Johan usually writes excellent pop tunes and I think you can hear that in our duo Innerst Inne. For the past 15 years or so, we’ve toured with Johans project Familjen where I’m taking care of the synths and sequences live.

Being 16 years old, I bought an Korg MS10 and MS20. Some years later, my studio consisted of those two, plus the VC10 and SQ10 in the same Korg series. Another friend of mine from my hometown had an ARP2600 and a Doepfer A100 system which I got to try out.I guess my real introduction though was thru the Clavia Nord Modular which I bought the very same day it was released. I still have and use the Nord Modular. Such a fantastic instrument and a perfect introduction to the vast world of modular synthesis.

The Korg MS system was obtained when I was about sixteen, seventeen years old. I worked all summers in a factory cleaning floors and mowing lawns to afford it. Was it worth it? Oh yes. I would mow lawns or cut trees while listening to cassettes with the latest techno music I’d recorded from the Swedish Radio and P3 Dans with Calle Dernulf and just dream of what I would do in my studio after purchasing those instruments.

The first years of having that MS system, I guess I was a bit too young to fully understand its potential. Plus, you can use those instruments quite a bit without connecting too many cables. The real fun started by totally not knowing what I was doing while trying out the Nord Modular. I made full tracks using just one patch in the Nord Modular, which is something I still do nowadays, more than twenty years later. I still have an ocean of learning and I consider my path in modular synthesis endless really. I’ll probably not tour the world when I’m older, but I can really see myself getting old living in the countryside somewhere and still discovering new ways of approaching my studio thru the eyes of a child.

I guess it’s because the possibilities really are endless. Especially so with the eurorack format. There’s always the need for an extra VCA, some new oscillator you’ve seen on YouTube etc. If you’ve got a prepatched synthesizer like the Minimoog or a Juno-106, you accept the number of oscillators, filters or whatever. You know there’s nothing you can do apart from using what you’ve got. In the modular world, it’s very easy to think that the reason why you’re musical output isn’t correlating to the ideas in your head is the fast that you need that new Mutable Instruments module. For me personally, the lust of just getting more and more features stopped briefly when I got the Buchla Easel.
For quite some time, I used it solely and I was very satisfied. But then my friend Jon, the maker of the TTSH, Serge 73-75 gave me an offer I couldn’t refuse and suddenly I had a few Buchla 200 modules and needed a boat for it. The boat had space for some extra modules and of course I had to fill those with something and well, I guess I’ve started a new journey.

I’m mixing a lot of ideas when I produce. In certain material, I’ve used the Buchla, eurorack, the EMS Synthi and Softube Modular in the same piece. I wouldn’t call me a purist of any school, but recently I’ve focused mainly on my Buchla setup. Apart from the Easel, I’ve got one or two E modules but my main interest is in the 200r. Meaning there’s only so many modules you actually can get, or at least what I find interesting. I’ve got two 12U boats and they’ve consisted of more of less the same modules for the past two or three years. When I turn on my Buchla and record for a week or to, I never think that I’m missing that or that module. I accept that the Buchla 200r format isn’t endless, the same way I think when I compose something using my 202’s and 303’s. When I’m focusing on the eurorack though, that’s when I start thinking I need a new granular module, some weird looping modules or any other module I’ve read about while taking a long bath that morning.

Most of what you hear is the Moog Subharmonicon. All the chords are from that one. I processed it using various eurorack modules. One way of making tonal changes was by sending each of the Subharmonicons six oscillators thru the Make Noise RxMx and sequencing which oscillator would be sounding. Speaking of Make Noise, I also used my version of their excellent Shared System.  What’s also playing a lot in the recording is the two oscillators of the DPO.
In my ”shared system” I also used the following modules: René, Wogglebug, Optomix, Morphagene, MMG, Mats, Contour and the Mimeophon. There’s also some parts of the composition where you get to hear the Buchla playing. I used the MARF which I put thru a 257r to increase and decrease the range of the notes that were played. The signal from the 257r was then passed thru the fantastic Northern Light Modular 2_OC which I used as an analog shift register. The ASR controls four oscillators, the 258v and 259r which also makes it sound a bit like chord progressions from time to time. The upcoming THC Programmable Pulse Matrix send polyrhythms to the 281 which affects the 296c. Each oscillator has a lowpass gate with individual output. A sort of simple setup that I use quite often. My album ”Case Studies for Buchla Volume 1” was recorded with more or less the same patch configuration. 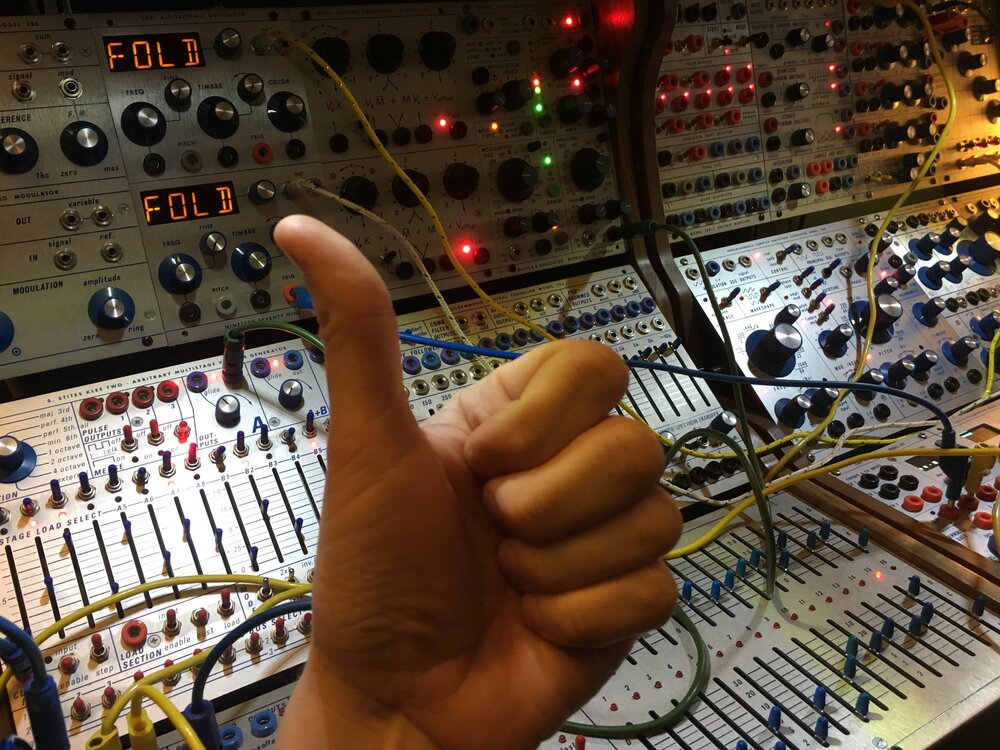 Feeling closely connected with the Buchla philosophy and sound palette, it would be a dream to have a big 200e system, but it will forever stay a dream. Unfortunately, working full-time as a music producer and artist in some sort of left field experimentalism  isn’t the way to finance expensive equipment. Having said that, I know I have a somewhat impressive studio setup, but it’s taken me 25 years of spending most of my income to get there. For the next 25 years, it’s probably wise to spend my income on something else. Pension money perhaps.

Are you feeling close to some other contemporary Modularists? Which ones?
Which pioneers in Modularism influenced you and why?

I really love what my friend Caterina Barbieri is doing with her eurorack system. In fact, after hearing her Gravity That Blinds and falling in love with it, I texted her and asked how she created it. Turns out it was done using a specific oscillator and not so much more and yes, I immediately purchased that oscillator. It’s a really inspiring oscillator but I have yet to record something as beautiful as Gravity That Blinds.
I absolutely love the minimalism of Eliane Radigue and I listen to her music a lot from time to time. After reading a bit about one of my favorite albums, The Expanding Universe by Laurie Spiegel, I got really into Analog Shift Registers for the first time. And again, I’m a huge admirer of all things Buchla so, yes I absolutely adore the musical output of Susanne Ciani and Morton Subotnick. Funny thing – my radio show has featured interviews with all these artists!

Perhaps the best way to start is to try software modular systems. I use the fantastic Softube Modular which is free to try and cheap if you want to purchase it. Some others might recommend the VCV Modular or even some iPad apps. Spend some days figuring out if modular is what your musical visions are missing. There’s way more simpler methods of making music depending on what tunes you want to write. If you want to sound like Depeche Mode in 1981, there’s way easier methods to accomplish that.
If you decide modular synthesis is something you want to spend your time and money on and you go for eurorack, my recommendation is to plan your system well. It’s very easy to just go wild with possibilities and think you’ll need this and this many oscillators or sequencers. You’ll end up selling your regular synths to finance your new love for eurorack, purchase too many modules and then sell those to get modules you really need. At least that was what happened to me. Oh, and don’t follow trends. Stick to your system. You don’t need to browse Muffwiggler, Moog Audio or Schneiders Laden for their latest incoming modules every Monday. 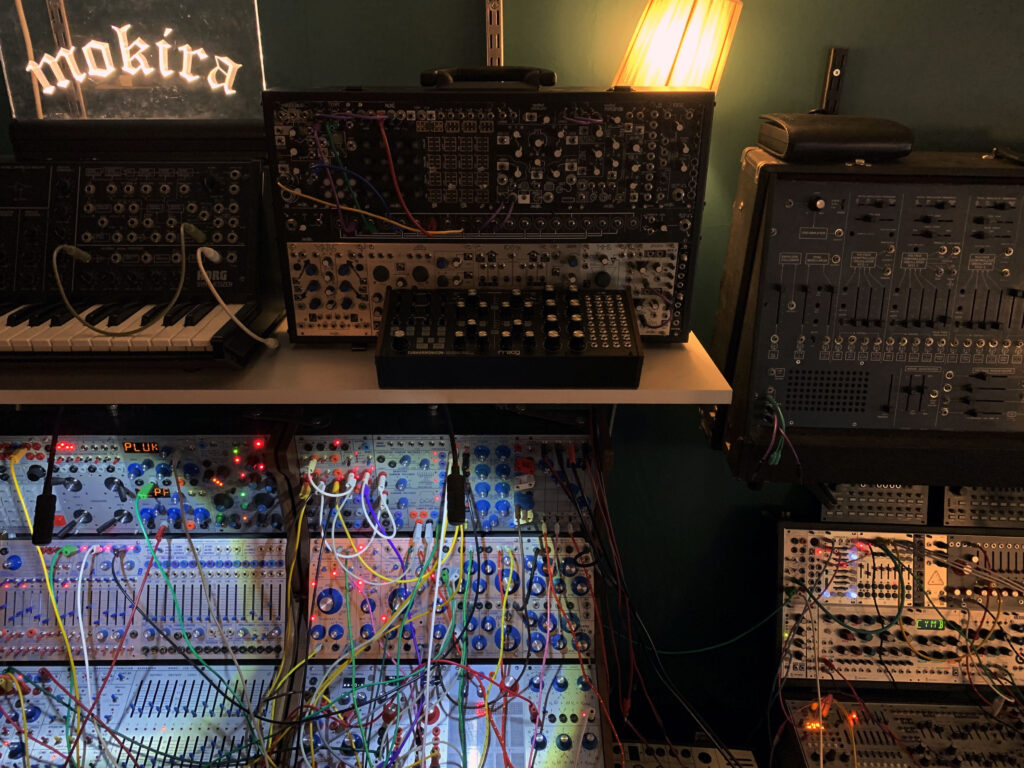