It takes time, like all learning, to immerse yourself in the modular dimension ! Except that the complexity of the instrument is infinite if you want to personalize it, adapt it to your needs. I often think that modular synthesis is good for my autism (laughs). At the same time my primary desire is to play my instrument and the only person with whom I have been able to exchange in Marseille is Fa Césario. We improvise, share and thus I do feel less alone, musically speaking.
Since the end of the 90s Fa Césario has been exploring the fields of noise / poetry and improvised music playing about a hundred concerts per year, building for each concert an instrument or a different system (set open system) though he paid very little attention to the recording of his music favoring the live aspect. Fa is particularly interested in the sensitive aspect often absent from electronic productions. He likes to explore the limits of his instrument, push further its possibilities / ratio of resistance and to a way of including the error as the engine of his musical possibilities:

« Without any error, imperfections the creation seems too frozen, lacking in life, and in order to achieve a good dose one must be fully communicating with his system »…

How were you first acquainted to Modular Synthesis? When did that happen?

I must have been a little more than ten years old, probably not very original but the EMU modular synthesizer on which Herbie Hankock played made a strong impression on me, seen on TV as the saying goes…. When I was about 13/14 years old I realized that the strange sounds I heard in my favorite sci-fi films (Forbidden Planet / Star Wars…) were made with Electronic instruments.
The first synth I spent hours on was a semi modular analog, in Paris at Angel and Freddy’s boutique full of Vintage synthesizers. Back in 1993 I had spent a week sitting on the ground with these two crazy owners passionate with modular systems, I had come there to have my TB 303 modified, we made friends drinking some cannabis liquor… At the end of the week I had a synth with several CV and gate inputs and outputs for filter note decay et al and an MS-20 offer !!! Thanx to the kenton interface at the time (hertz v / oct) I was making my first mini patches. Doeppfer was not there yet and I went to short circuits, weaving my patch directly on the components of the disemboweled machines. The era of technophany and bending circuits started for me. I was first interested in the modular aspect of the patch before getting initiated to different synthesis forms themselves. 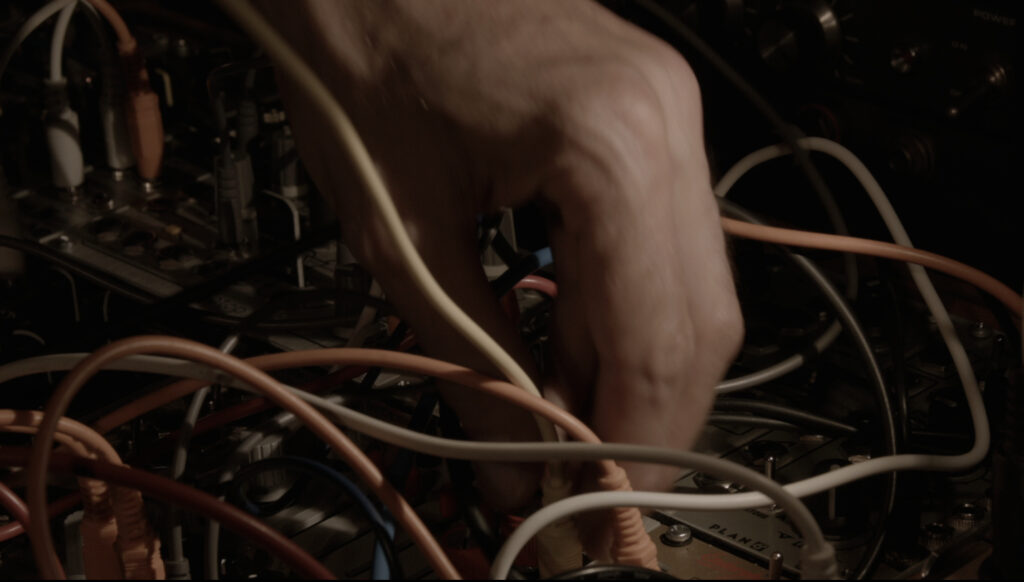 I am a free improviser, I always composed on the spur of the moment / but it was after deciding to leave the traditional production process (I was a Hip Hop producer in Marseille) that I started to take on improvisation on open systems.
The big change was to start accepting permanent change as a normal process and not as a radical form of diversion (circuit bending) / Gradually acquiring another form of «  cognitive plasticity », (cerebral?), gave way to calm and an obvious access to simplicity… all relative of course considering the obvious high technology of these Modular Systems.Same as with any instrument, be it a guitar or a piano, you have to know how to listen to your system.

It is true that Eurorack is offering a multitude of brand, new functions, appetizing possibilities et al… I believe this comes from a genuine need to keep searching for new directions, originality and dynamics but what explains compulsive buying is something else, same with smartphones, computers etc… To consume is to exist in the Capitalistic world we live in…

When I recorded «  ART BRUT MOLECULAIRE » I was playing a 2 row / 84 hp Harvestman system, along with a 12u hybrid one consisting of modules from Mutable instrument / Cwejman / Doepfer. Recorded at GRIM (Marseille musical research and improvisation group) and Mixed at GMEM (National center for musical creation Marseille), mastering by Philippe Petit.
It could divide in 2 parts:
The first one is a long piece taken from an improvisation of several hours where I focused on the repetition of a series of gestures on 5 selected modules, in the center external Tracking pitch center for metallic strings (see video on my youtube channel) fx shimmer tip top ^, rg-6 cwejman + Dmf2 + Piston Honda and Clouds from Mutable Instrument.
I chose a part where the errors in the repetition of the gesture lead to structural transformation but also to texture and harmony.
The second part is a free improvisation suite with a work on Aliasing, the “rejection band”, the deterioration of the sound thought as a tribute to the work of Jean Dubuffet. I managed to stay locked up in the Lausanne Museum of Art Brut where I was able to spend a few hours before the police dislodged me. The idea to use Art Brut works as a graphic score was born.
First granular sampler in eurorack the Nebulae of Qu-bit electronic is very present on this part
During my residency at GMEM 2015/2016, Charles Bascou (developer for GMEM then) wrote two new codes for me. Based on optimized audio and real-time resolution: a “Kraken” slicer and a granular “grain operator” house which perfectly adapted the Nebulae to my gameplay needs. 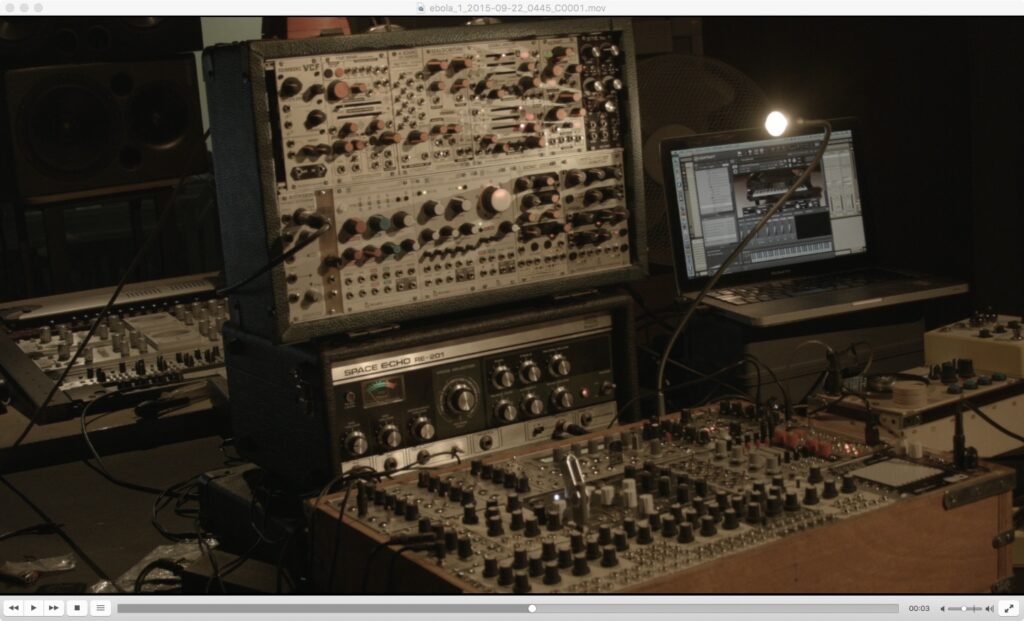 I improvise on a 9u 104hp system: Cwejman 2 rows + 1 row dedicated to sampling (erica, 4ms) + fx Strymon Magneto.
Two notable features: absence of a sequencer and the intermodulation of the 2 RG-6 Cwejman randoms.
I also use in addition two Metasonix Lamp pedals, for coloring and allowing some “noisy” feedback.
It’s been about 15 years that I have been dreaming of a hybrid system. I have not managed to completely envision/define it yet. It would be in Eurorack format, Midi and circuit-bending. A system allowing studio-production, research and improvisation.

I like Richard Scott’s instantaneous dimension and his adaptation to the various mediums of improvisations: voice, acoustics, electronics etc…
My influences come rather from adjacent fields: painting, poetry, science, philosophy, while my influences in science, philosophy et al come from music.
Music allows the invention of a form of transversality,… interdependence of roles.

Nothing is impossible and does not depend on the instrument, far from it. Be patient ; listen, share question and find on forums. Community a term that takes its true meaning with the modular and its multitude of unique dynamics …. ideally ! 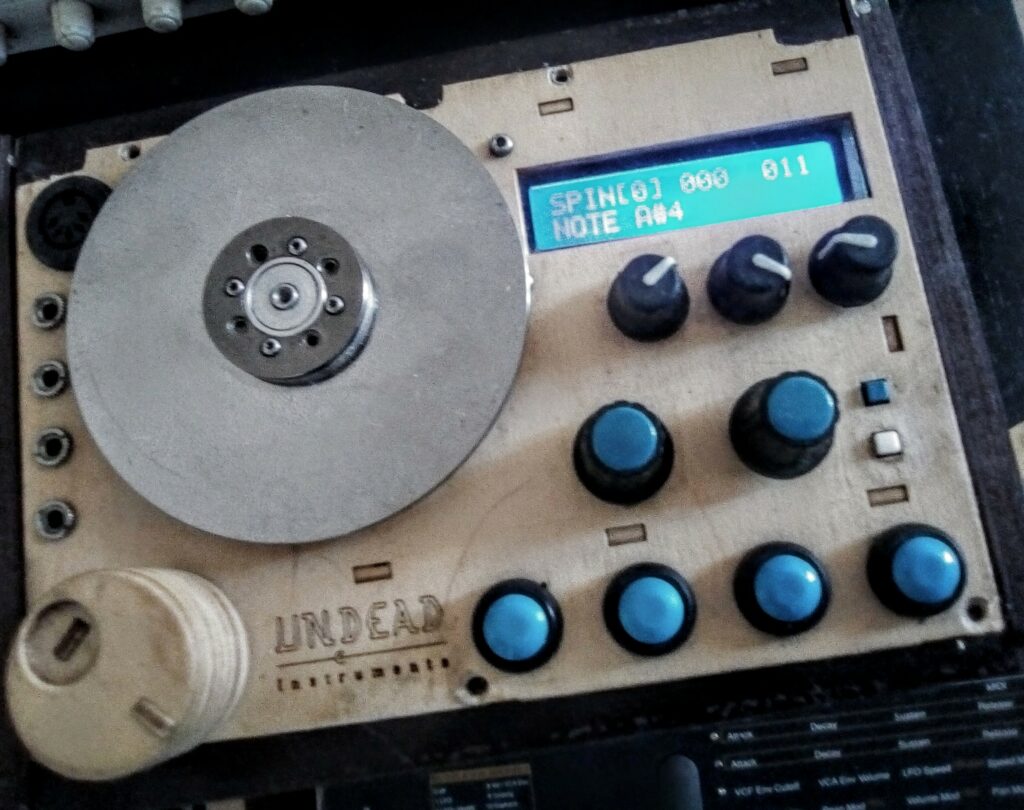