Kevin Rix studied orchestral composition and decided to move to L.A. to pursue a music career. At some point, he was introduced to computers and Cubase, and tried to produce EDM but hated being locked into one tempo and 4/4 time signatures.
Hans Zimmer’s score changed his life. He thought, “That’s the kind of music I want to write!”. He began composing, and in 2005 met Paul Dinletir from Audiomachine, which is a production company that places music in film and tv trailers. Within six months he was a full-time composer at his company, and still work with him today. He released 3 wonderful albums under his own name…

How were you first acquainted with Modular Synthesis? When did that happen? When did you buy your first system?

In 2016, my dear friend and colleague, Steffan Koch, called me up and said, “Dude, you have to go to this store called Perfect Circuit and check out their modular synths.” I was hesitant at first, as I was completely in the box at the time. Then I searched YouTube and found some DivKid and Colin Benders videos and thought, “Holy Shit! That stuff sounds amazing!” What Colin was doing on his YouTube channel completely floored me. I bought a small Doepfer case and filled it with a DPO, Maths, Verbos Harmonic Oscillator, Veils, and a Bubblesound SeM20 filter and then a Skiff with René and Pressure Points and a few other modules I can’t remember. I didn’t know it at the time, but I immediately started recording tracks that would eventually become my first album, Uncivilized. 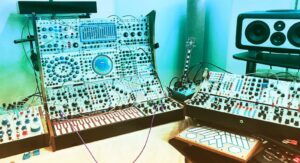 Modular changed everything. I had not realized how burned out I was creating music on a DAW. It’s such a tedious process with very little interaction except for tons of mouse and keyboard clicking. It didn’t feel right anymore. I was also beginning to hate almost all music from the last decade. DAWs are capable of creating the impossible, yet that technology has been reduced to music correction software. Autotune the vocals, quantize the instruments to a grid, make everything sound perfect and boring. That kind of music doesn’t mean anything to me anymore. Modular is such a chaotic and interactive way of working that it seems to match the anxiety I feel being alive in today’s quickly-changing world. At first I justified all my modular purchases by saying I was going to utilize them for my day job as a film trailer composer. I did integrate them, but when I got my first call to drop an entire piece from Dmin to Cmin I quickly learned that modular sucks for making commercial music. Plus, I was developing a deep connection to the modular instruments and wanted them to be their own thing. When I work for money, I use a DAW. When I work to create art, I use modular. I still use modular for trailers, but I use it more like how Thys from Noisia uses it—I sample it and use the DAW to integrate it into my productions.

Been there, done that. At first I was trying to make it like a DAW, where I had absolute control over my compositions. But modular is more about personal expression and capturing a moment in time.  Module hunger is also one of the reasons I decided to move away from Eurorack and only use Buchla. You have limited choices in Buchla. Granted, I have a big system, but there’s nothing more to get. My 200e system will keep me busy forever. When I bought my Buchla Skylab, I instantly wanted a bigger system, but I told myself, “Nope. If you can’t record one album with this thing, then you don’t deserve a bigger system.” So I recorded the Lalikins: Book One and Two albums. The day I received Book Two back from Shawn Hatfield’s mastering service, I called Eric Fox and ordered a 24 panel system 🙂

Everything on the track was recorded with a Buchla 200e system in one take. I hit record with nothing patched in and started performing as I patched. As Todd Barton says: “follow the sound.” To me that means “follow the emotion” and “follow the story.” I believe that’s what Todd does in his compositions. I heard his incredible Multum in Parvo album two months ago, and since then I’ve been recording many patch from scratch improvised compositions. The main sequencers I used are the 250e and 252e. The oscillators are the 259e, 261e, Studio H 258e, and 25S. Other modules used are the Vedic Scapes delay, 1979 SMP, 266e, 281e, 292e, and 296e. I also have the Strymon blueSky and TimeLine patched in.

I already own it. The Buchla 100 reissue systems seems really interesting though. Dammit. 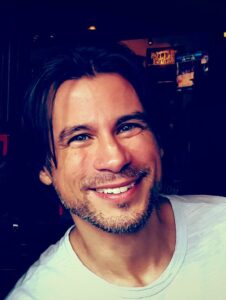 Yes. There are so many. I participate in the Colorado Modular Synth Society started by David Soto and love hearing those guys perform. It’s so inspiring. Funny story, I actually knew Mike Thomas from YouTube and had no idea he also lived in Denver and was part of the CMSS. When I went to the first Freq Boutique, started by Alex from WMD, I saw Mike in the crowd wearing a Buchla Skylab shirt. I said, “Hey, you’re one of the original subscribers to my YouTube channel!” He looked at me like, “I have zero idea who you are.” Haha. I’ve made a lot of new friends because of modular. That’s another reason I love it. The modular community is filled with the nicest and friendliest people in the world.

Other artists I love listening to are Surachai, Moe Espinosa, Anthony Baldino, Richard Devine, Cortini, Rodent, Bana Haffar, Lightbath, etc. These are all true artists and a huge inspiration. Plus, they are the pioneers of Eurorack. Most of them have been doing this for over a decade and have carved a clear path for those of us who picked up on the trend recently. It’s so awesome how all these communities are following their lead by starting local modular groups and creating a fanbase within their community.

Todd Barton, Suzanne Ciani, Caterina Barbieri and Morton Subotnick. They understood what these instruments are capable of. They understood that these are tools to push beyond contemporary music and to create new musical landscapes. Recently this has been very important to me, which is why I’ve been spending all my time as of late developing a patch from scratch improvisational approach with the Buchla 200e.

Start small and learn the hell out of what you have. If you ever think you need more modules, watch Baseck on YouTube. He can blow all of us away with a 6U system. And stay off social media as much as possible—self-promotion won’t help you get any better at your craft. Focus on your own expression and artistry and support the people who inspire you. Record your work! I’ve discovered so many wonderful modularists on YouTube, and I think people should record their work early and often. It’ll never feel perfect, and your style and interests will change, but even if no one ever hears it, you’ll have a history of your own progress. Attend or start a modular group in your community. It’s amazing how many different ways there are to use modular synths, and shared musical experiences and expertise can be super beneficial and motivating.