Miguel Frasconi is a composer and improviser who has created through-composed operas, ensemble music, scores for modern dance, and also performs concerts of improvised music, both solo and ensemble.
Miguel specializes in 20th and 21st century repertoire music, and has been playing experimental glass instruments for over 45 years. He also plays keyboards, but these days in addition to composing, likes to improvise on modular analog electronics, most often controlled in other ways than using a keyboard.

I think I decided to be a musician and composer when I was around 8 years old. My school class went to see the local orchestra play Charles Ives’ Third Symphony.
I had of course listened to music before, live and otherwise, but this music did not sound like anything I had ever heard. To my young ear this did not sound like music but more like weather; as turbulent and unexpected as a storm. I left there thinking, if a human being can create something that sounds like weather, that is what I want to learn how to do. I was hooked on wanting to make something that seemed more than just “music.”  I started playing piano then later discovered recordings of early electronic music and kept following that lead.

I just released some duo improvisations with me on BugBrand + Buchla modules and Tom Hamilton playing Nord Modular Keyboard. At the beginning of this quarantine we are all still in, I have been doing weekly trio Zoom broadcasts with Tom on Nord and Matthew Ostrowski playing MAX. I’m also planning on putting together an album of the work I did with the Buchla Skylab between 2015-2018. I have been releasing some solo electronics album on my Bandcamp site, as well as some archival early acoustic and electronic works. I’m about to release an album to commemorate the 20th anniversary of my 2001 New Albion Records release, Song + Distance.

When I was 17, in early 1974, my composition teacher arranged to get me weekly private sessions with a new Moog System 55 at a local university. My only experience up until then was listening to and reading about musique concrete. I knew nothing about envelopes or patching or modulation. But I was fascinated & excited, and learned quickly. I then visited my brother who was attending York University in Toronto and sat in on an electronic music class given by Richard Teitelbaum, whom I then started studying with later in 1974.

My first experiences were in early 1974. I then studied electronic music with Richard Teitelbaum and David Rosenboom at York University from ’74-76, working on an ARP 2600, ARP 2500, and a Putney VCS3. Modular synths were much too expensive for a student to own back then. My first analog synth was an Electro Harmonix Mini-Synthesizer with the touch keyboard, which I purchased in 1980. I have also owned a DX7-II, an Ensoniq ASR-10, and a Sequential Circuits Pro-1. My first modular system was a Buchla 200e Skylab, purchased in 2015.
I now play a BugBrand system with a couple of Buchla modules for modulation + mixing.

I am probably best known for playing acoustic glass instruments. While I was studying electronic music in Toronto, I was using a lot of glass objects as sound sources for my electronic tape pieces. I noticed others were doing so also. I then suggested that a few of us get together and try to make similar sound exploration pieces but without any electricity and just with glass. This started the group, The Glass Orchestra, which I was in for 9 years (1977-1986) and is still going today. What I was doing, and still am doing, with glass was to take some electronic music principles and apply them to the acoustic realm. Things like frequency modulation could be achieved acoustically by placing one thin piece of glass against a vibrating glass bowl.
The entire sense of sonic exploration that was very active in electronic music at the time was transferred to the acoustic realm with only glass objects.
This could not have happened without first studying electronic music.

What was the effect of that discovery on your existence?

It has been interesting bringing the things I have learned by playing acoustic glass, which were first inspired my electronic music, back to the electronic world. I think my recent playing has been influenced a lot by acoustics. 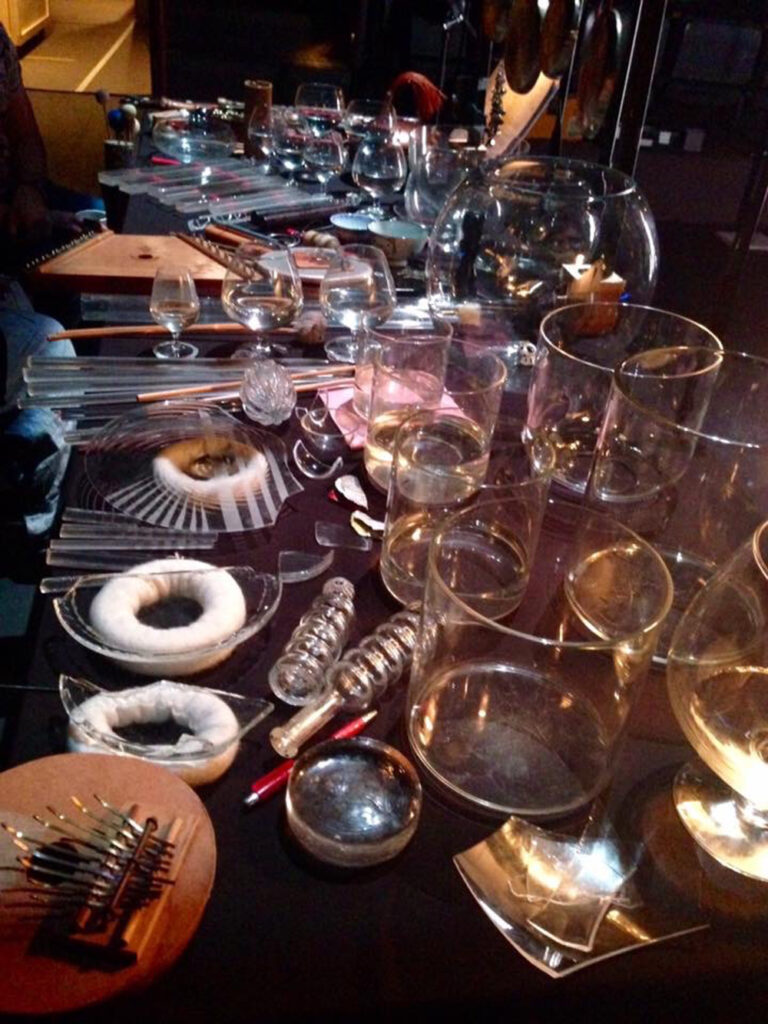 I have avoided that hunger for new modules by intentionally playing self-contained systems designed as a whole by one designer. First the Buchla Skylab, then the BugBrand system. I want to treat my modular system like I do any other instrument: buy it once and master it with all its inherent limitations. I do not use Eurorack because I know I would become more interested in new hardwire than in new music. This was my personal choice and certainly don’t fault anyone who likes to keep their modular system evolving.

This was made mostly with a BugBrand 2Frame, with a PTDelay and Spring Tanker. There is also a self-oscillating Metasonix TM-1 SE waveshaper. Everything gets put into a Buchla 206e mixer with two channels of CV controlled panning being fed from a Buchla 266e random generator. This random generator also controls the PTD delay time. Within the 2Frame there are three oscillators, with one used for clocking. The other two, along with the amp, filter and envelops are controlled via a dual digital shift register, and occasionally, a pitch quantizer. 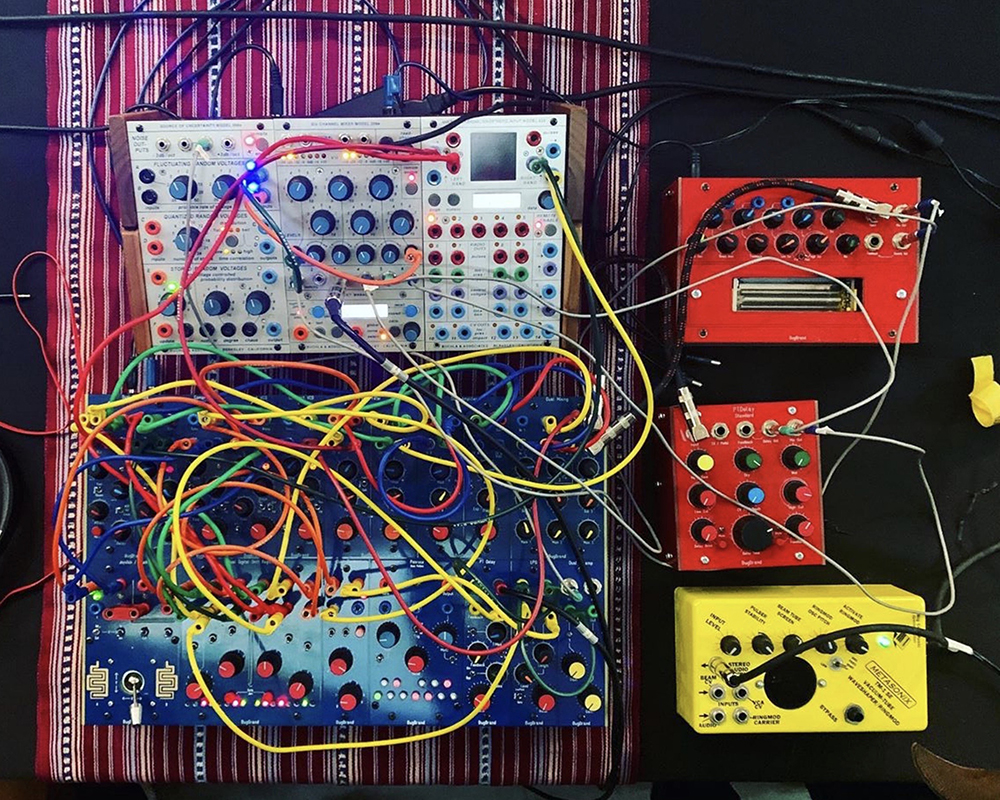 The voice patching is similar to a regular synth patch, although there are three voices coming out of the 2Frame, one for each oscillator and one for the LPG routing. I have a joystick with the Y controlling the speed of the clock and the X controlling the pitch of the two oscillators, patched in opposite directions. The CV outputs of the shift register go to various different locations. Tom Bugs made me a couple of cables where I can switch between the pitch quantizer and the direct CV, giving it a wide pitch and timbral range. There are five audio streams going into the Buchla mixer. One channel for the main oscillators, one channel for the LPG voice, one channel for the Metasonix, one for the delay return, and one for the spring return. The main 2Frame channel and the delay return channel each have random panning from the Buchla 266e.

I would love to have a Serge system to interface with my BugBrand and Buchla systems. But there is still a lot to learn with what I presently have.

My mentors were Mort Subotnick and (the recently passed) Richard Teitelbaum. I love seeing how Mort, with whom I toured for many years, keeps his system fresh by interfacing it with Ableton Live, and I worked closely with Richard to build his evolving Ableton Live patch to facilitate some sort of quick-changing environment.
I certainly follow my contemporaries: my old friends on the west coast Gino Robair (who first turned me on to Tom Bugs) and Tom Djll, whom I’ve played a lot of music with. Here on the east coast I have played often with Tom Hamilton, on Nord Modular, and Matthew Ostrowski, a MAX master. I also like what Hans Tammen is doing with his Buchla Easel. I’m sure I’m forgetting some others. I have weekly zoom sessions with a band I have been playing in since 2009, The NewBorn Trio, with Katie Down on glass and other acoustic instruments, and Jeffrey Lependorf, on Asian flutes and glass, where I play glass and electronics.

My biggest influence would be Richard Teitelbaum. From the first time I saw him play live in 1974, before studying with him, I was fascinated by how he could improvise with the Moog 55 system. He patched and repatched so quickly, changing sounds to compliment or contrast the other players around him. He was a master at pre-digital electronics.
Stockhausen’s early electronic music pieces, and the music of Pierre Schaffer and Xenakis, were huge influences on me and they way I learned to listen to new sounds.

Find the right arrangement of modules and stick with them for as long as you can, learning every little subtle detail they are capable of. 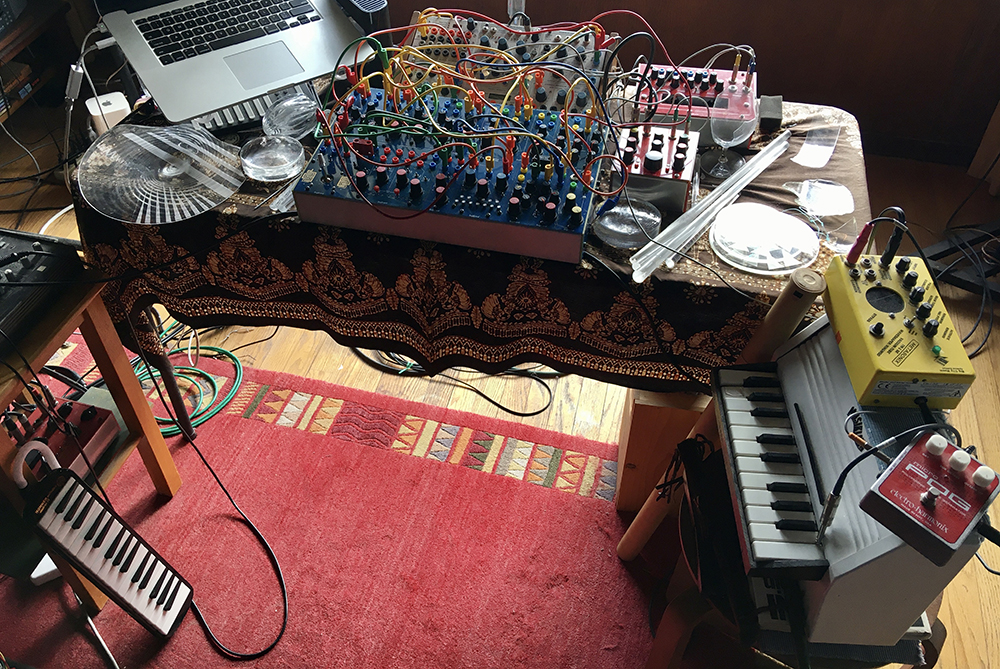