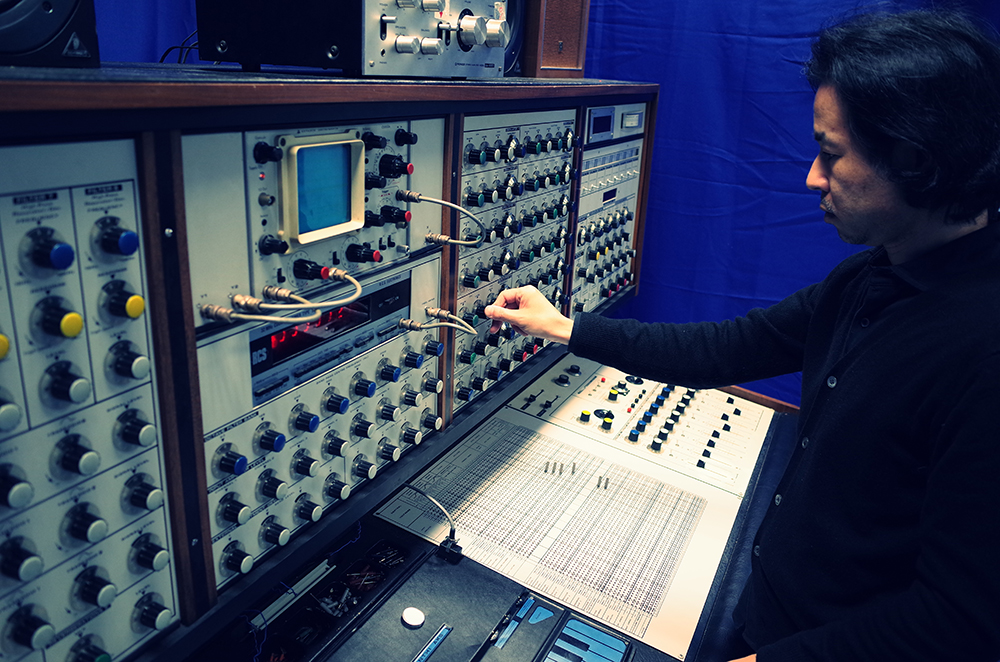 In 1999, I self-released my 1st CD box set “Hypernatural”. The concept of Hypernatural series is sound collage with meanings that each sound has, like visual collage art work. I was really influenced from works and concept of Russell Mills and Ian Walton. I used gong sound a lot as a symbol of light (from ancient Asian and Japanese myth). After that, I chose Steelpan for my improvised performing, because of its metal sound. In parallel I was playing some synthesizers.
Later on I had an opportunity to get a Synthi AKS.
“Music from the Synthi” was released from the French label Baskaru. This album was made playing my Synthi without any outboards.

I have been rehearsing-working on “Music from the Synthi 2”. Later this year, a vinyl album of I (Steelpan) and Cal Lyall (Banjo) will be released from a Belgium label By the Bluest of Seas (Okraina).

Being trained as a percussionist yourself how were you first acquainted to Modular Synthesis? Do you use a Synthi AKS only?

I use the Synthi AKS only. I used to own some synthesizers, but I sold’em all. 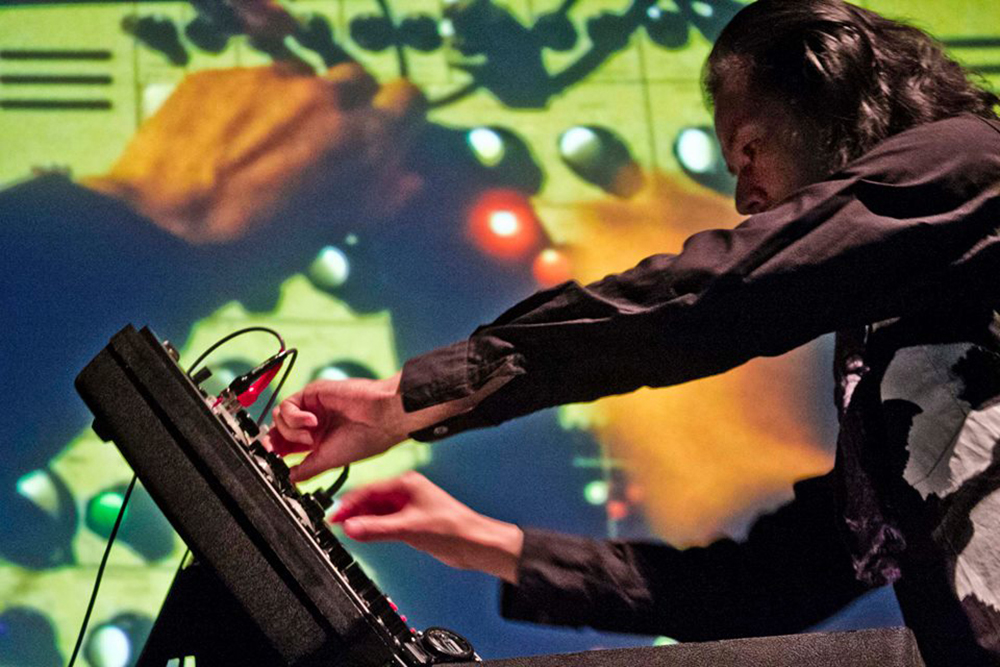 I had already heard of the Synthi when I was in high school. At the time, I used to go to instrument shop to touch analog synthesizers like Mini Moog, Odyessey, Korg MS-20, etc… They were super expensive for a boy, so I could not buy any.
I wanted to have a Synthi because I knew Brian Eno used it. And a long time passed, finally about 15? years ago I had a chance to get it.

I knew almost everything what I can do with Synthi. Because I really really wanted it, so I simulated routing in my brain. But physical machine was more great comparing to imaginary machine in my brain. So many “unexpected” things (sometimes kind of error) are happened with this real machine. I feel this is really acoustic in its way. 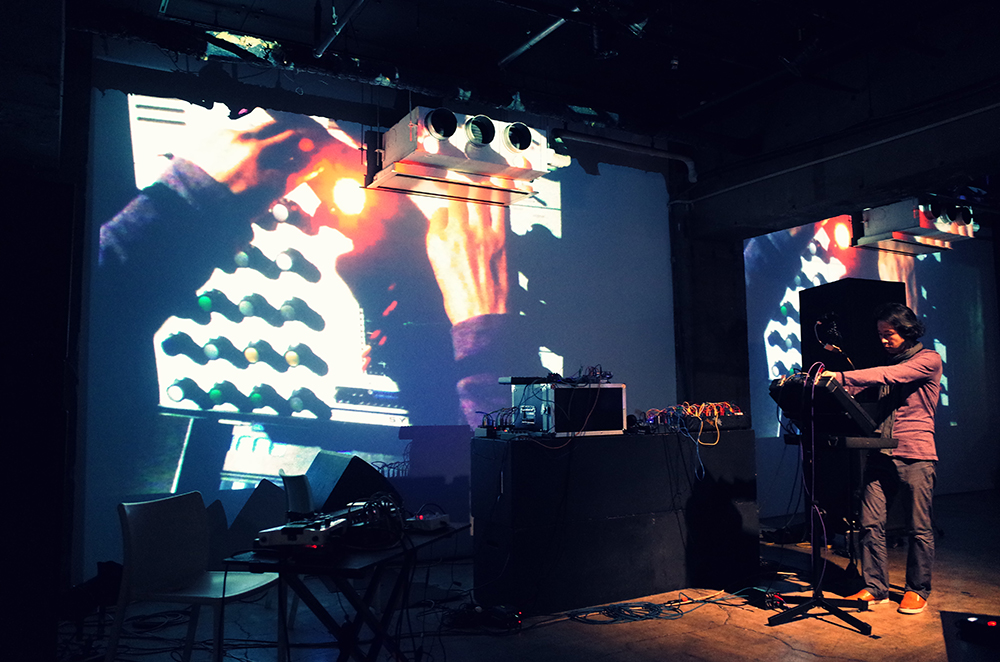 I can imagine it. If you always enjoy to try new ones, it’s OK. Life should be enjoyable!
As far as I’m concerned, I like to experience some kind of limitation. When I started to play Steelpan, I used Max/MSP for realtime processing. But now I don’t use it for performance. I try to play only Steelpan, but with “feeling of realtime processing effect” by my 2 hands. Synthi’s routing is really flexible, but there is limitation comparing to modulars. To me, that’s the good point and enjoyable.

Yes, I agree, I think so. Now, if you explain “music” on traditional historical context like Bach-Mozart-Debussy-Stockhausen-John Cage, etc, it’s almost impossible to explain all enough. Because it’s “one of the view points” for explaining music. Now “music” is really complex. So many view points exit about music. This modular culture is one of them. This is really interesting phenomena. First modular synthesizers were made in 60 to 70s. And after 40 to 50 years, suddenly it became popular. I think this whole phenomena is more interesting than any music created by modular system or specific modular artists.

Would you please describe the system you used to create the music for us?
Can you outline how you patched and performed your Synthi for the Modulisme session?

Basically I use Synthi as kind of rhythm machine with bass. Synthi AKS is good at repetition.
KS (keyboard and sequencer) can produce sequence pattern, Envelop Shaper can produce also repetition, if I use really low frequency, it can be bass drum sound… etc. I like to mix these sequences without overdubbing, looper. Recently I built wonderful expanders, Sister Card and The SQ-1 Card from Portabellabz. They can add more complicated rhythm to Synthi. Constantin’s Portabellabz is really great! I respect his activity.
I uploaded some videos with these gears on youtube:

I have seen Jan Jelinek’s modular when he came to Japan. We recorded an album which has not been released yet… Back then his modular was simple and powerful. Recently it seems to have become much more complex. 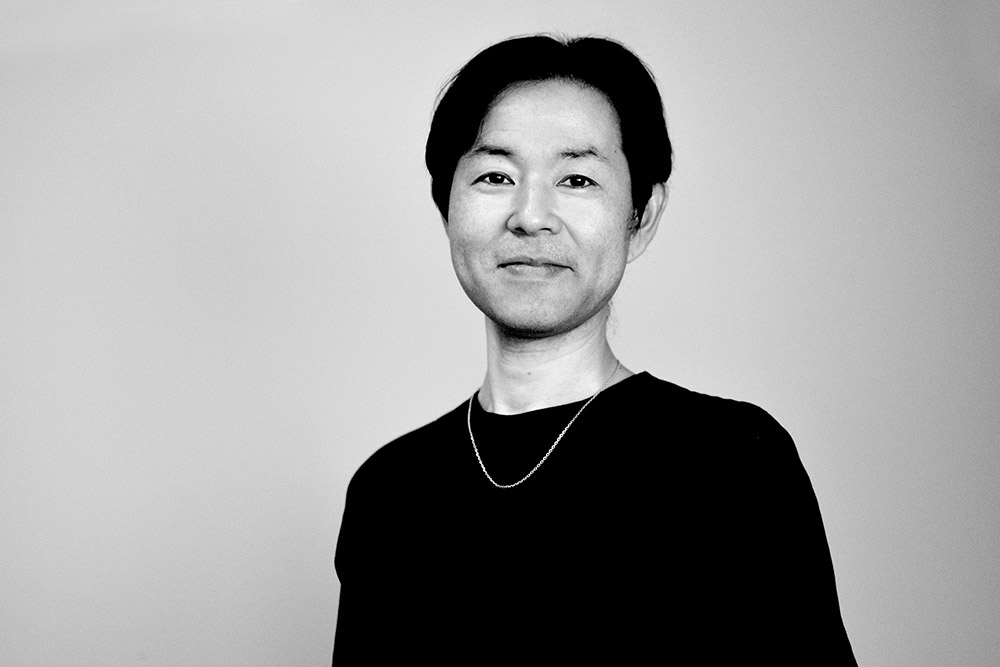 Personally, I recommend to use limited modulars. For example, if you buy a case, just think what you can do with modulars in this case without without any modules. Limitation makes you be strong. But most important thing is to enjoy it! 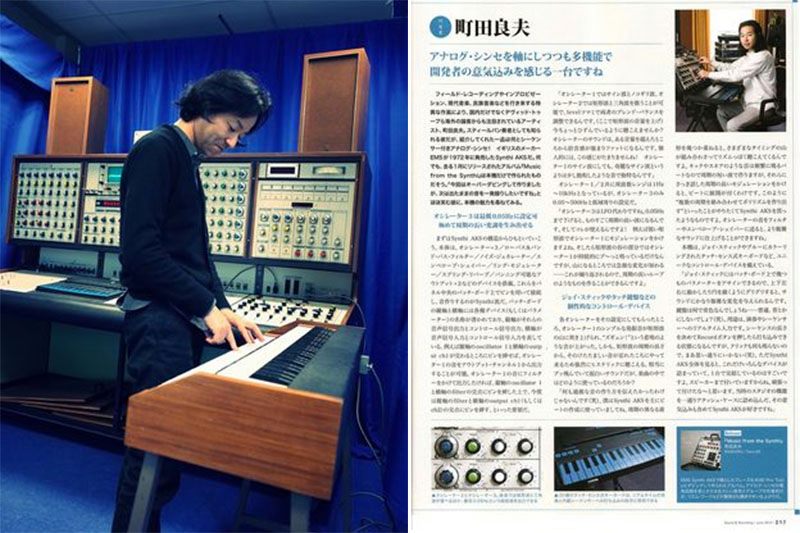