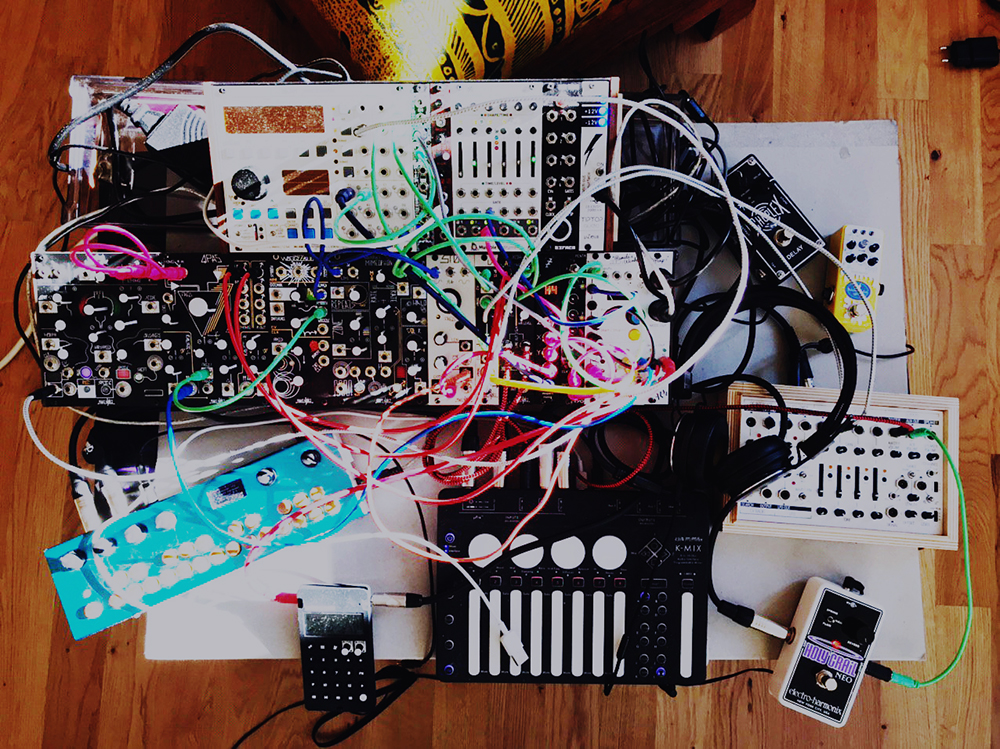 Bartolomeo Sailer started to make music at the beginning of the 90s after he had developped his musical taste by animating a radio show airing early Acid music, Industrial, (post)Punk, Avant-Garde. By then using an Amiga 2000 with a tracker software and a DIY 8 bit sound card, just sampling cutting and pasting + eventually sequencing. Later on he added a Yamaha CS-5 and started to develop a personal style, while DJing at a mythical underground club in Bologna called LINK. His idea was to use concrete sounds to produce Techno. Ever since the music of music has managed to bring some rhythmic playfulness to a good dose of experimentations. Pleasure for body and mind !

In 1999 my first record as Wang inc. appeared on Sonig/Thrill Jockey and it was called “Plastic/Metal”, a title I had chosen because of the sounds I used. Then the second album on BiP-HOp “Risotto in 4/4” came out, and a few years later another album on Context.fm and a few singles on Persistence Bit.
At this point it’s 2010 I’m married, have a child and must feed the family, so I embarked into 5 dark years of music for jingles. Divorce took place, life got fucked up. I sold my CS-5 to buy a Doepfer Dark Energy mark 1, my first semi modular synth. The projects called Walking Mountains (a sort of computer programmed post rock) and White Raven (romantic techno) appears and disappeared.
I started my own label with the friend Carlo Mameli called Random Numbers and Wang inc. came back with a new 12” called “Mediterraneo”.

As I was saying in 2020 a 12” called Mediterraneo came out. A story of migration and despair in which the forces of humanity fight against evil. It was a long process, because I changed a lot of gear in the mean time, and to find the right path was not easy. Also running the Random Numbers label takes a lot of time. Right now we are programming a new Various Artist with new and old artist, and it will be on our Bandcamp really soon and in the best record shops.
In 2021 a new Wang inc. mini album together with vocalist Nico Note will come out on the Italian label Rizosfera. It is called “Limbo session” and consists of 3 radical improvisations we made in 2020.

Modular is a strange concept, and I really do no distinction between hardware and software. So perhaps Ableton Live is a modular DAW. VCV Rack is a modular software such as was Generator by Native Instruments (the Father of Reaktor) back in the days or Audiomulch, Max MSP, Pure Data and so on…
I have been using these softwares for decades already. 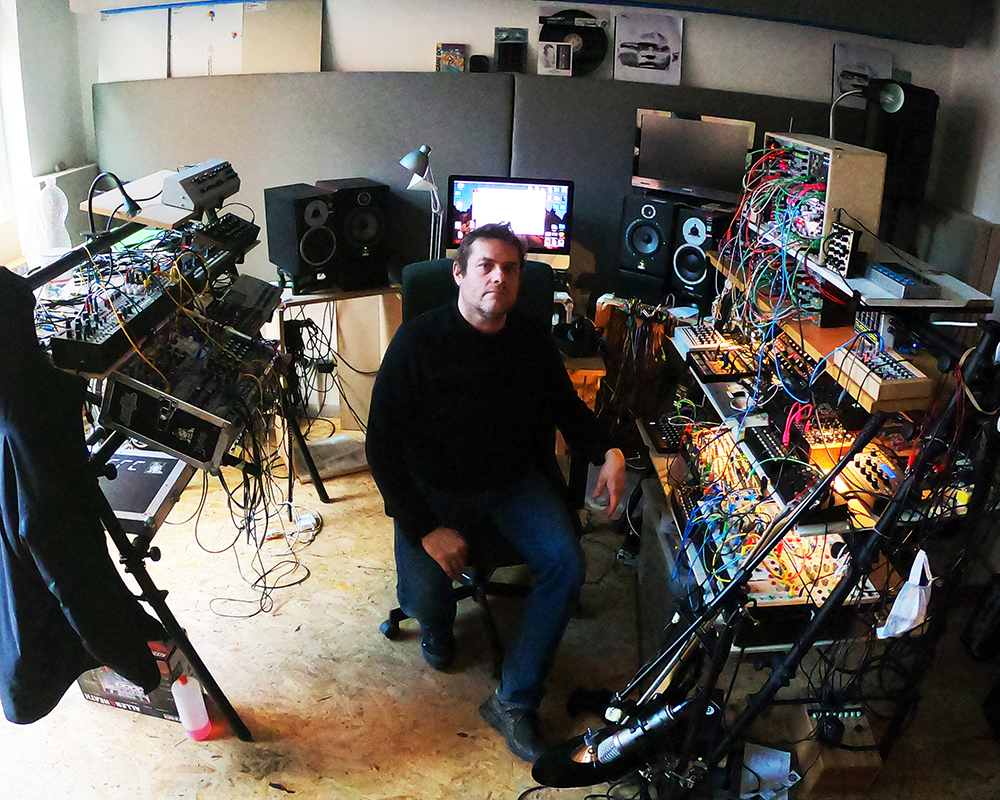 I started patching with Generator back in the first pentium PC era. Nowadays I have a lot of semi modular synth and 2 modular systems: a Serge 73/75 with 4 modules (2 home built), a Buchla 208 command and a eurorack system with 268hp of various modules.
I must say I was really scared to get in the Eurorack business since it can become really addictive, so for a lot of time I was buying semi modular stuff such as the Dark Energy or the 0-Coast. But then, a few years ago, I’v seen this module that I really wanted: the Orthogonal Devices ER-301. And this was my gateway drug to Eurocrack.

When did that happen? When did you buy your first system?What was the effect of that discovery on your compositional process?
On your existence?

As I say the idea of patching came really soon with the first audio suitable PC. It really was mostly a lot of attempts to create even really simple stuff. The real illumination arrived just a few years ago with the 0-Coast by Make Noise. A little system which can do really great stuff. But I think my compositions process was really changed by human beings, and not by gear. At one point of my life I had to face the challenge of playing sequences and boxes in an improvisation context, with real musicians and traditional instruments. I could just push buttons and turn knobs, and the interaction with a real musician that played a bass or a theremin was something new and mind blowing. Since then my research in finding a way to improvise with sequences and knobs was my main goal. Modular systems (analogue or software) gave me a hand but it’s a global method, not influenced by the hardware. Now it’s a year and a half that I’m in a radical improvisation collective where I’m the only electronic player. And it’s really fun to bring along a few instruments and do some noises (Ciat Lombarde Tetrax, The Hive, Teenage Engeneering PO-32 and a few pedals). 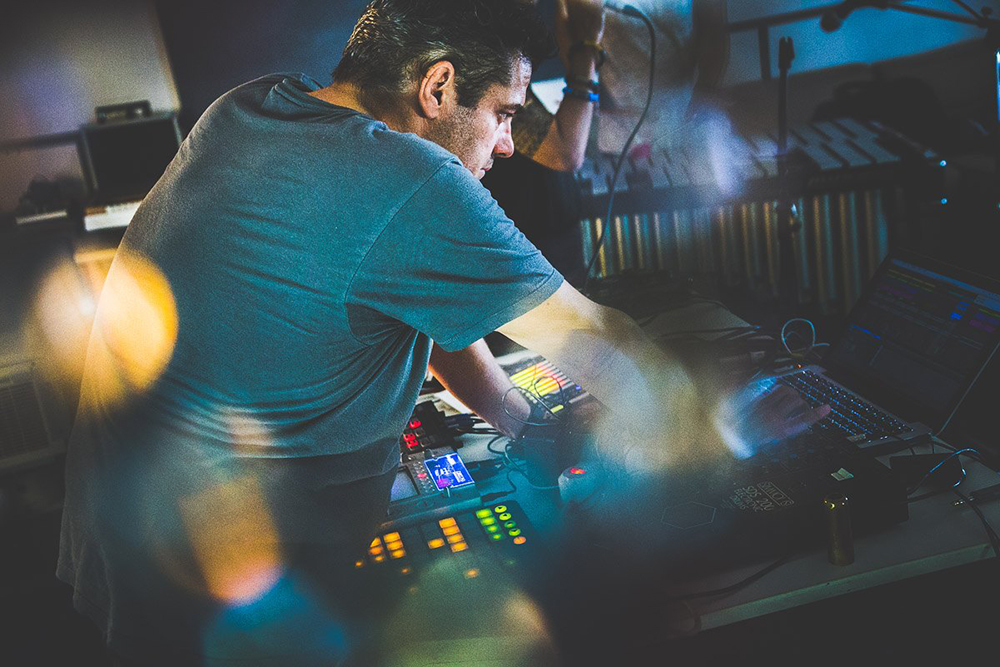 It’s a drug, well designed and highly addictive. I’m already planning an expansion of my Euro system on modular grid. But the thing I’m looking for are new designs, new ways of creating sounds. Not just the best oscillator, but a new oscillator. This helps limit choices since most of the products are replicas of simple stuff.

I must say that after 30 years in electronic music I developed a good idea of what I want and how to achieve it. Most of the time my productions are a mix of PC, digital, analog, vintage. But I must say that I still take my time to explore new territories, find new paths to explore. Improvisation is still a big part of my creation.
I must also say I’m a big nerd and I can stay up all night watching 10 tutorial on one synth to understand if it suits my idea of music. 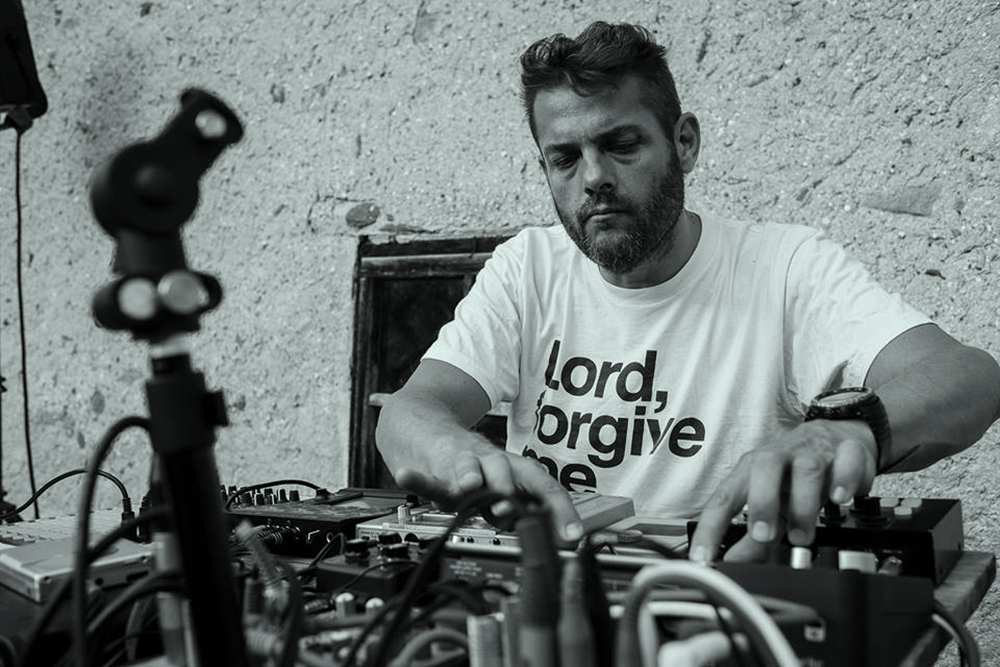 The system is made by a 104 skiff that was intended for stereo processing, but then expanded in something else. From Left to right Make Noise: Morphagene, Q-pass, Wogglebug, Mimeophon, STO, LXD, XOH; Expert Sleepers Disting mk4; Ryo Penta; ALM Pamelas New Workout with breakout. Then there is a smaller rack only 60hp with from left to right: Orthogonal Devices ER-301; Zlob: Entropy and LFO; Mutable instruments Stages; Befaco Midi Thing and a power supply.
Then I used my beloved Organelle by Critter and Guitari, the Koma electronics Field kit, Teenage engineering PO-32 and the Electroharmonix Holy Grail Neo. Some of this instruments and modules are at this point of my life, almost one year after the recording not more in my possession, I often squeeze all out of one instrument and then change it to explore new territories.

It all started with a new app for the iPad, that had a really wild interface to modulate and tweak sound called Mutant by Maze Tools that I used to generate sounds then sampled in the Morphagene. I created six splices. This was the foundation on which I builded the house. From there it was a creation upon the 6 soundscapes of the Morphagene, adding beats and basses, effects and modulators. One rehearsal to explore the possibilities and then the recording, I made a multitrack recording so I had the chance to remove things that did not fit in the final idea. 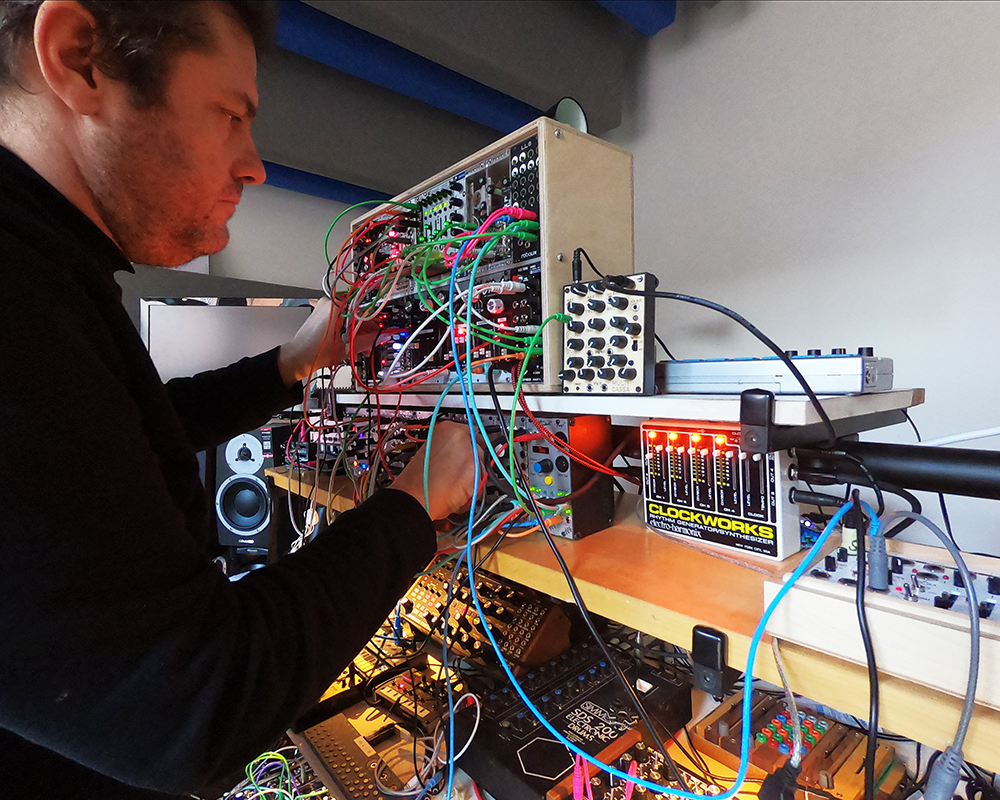 The EMS Synthi 100. I have a friend that has one in the town where I was born. And I had a chance to play with it for a day. Just amazing ! I had the chance to fiddle with other vintage systems, like the Roland system 500 at the Roland research lab in Hamamatsu but the EMS sound is huge.

Not really. There are some I really admire and that are published on Random Numbers, like Mudwise, Somec Gattobus. Others like Charles Cohen, Suzanne Ciani or Rashad Becker (who had cut my first record back in the days).
I saw all of them a few years ago at the great Terraforma Festival near Milano.
I admire them but I define myself a self made man.

My real love is with Serge Tcherepnin, and his idea to create simple modules with infinite patching possibilities that are made with really basic components. Suff for the people, for the working class.

First rob a bank! Or learn Electronic engineering to avoid robbing a bank, and go DIY! 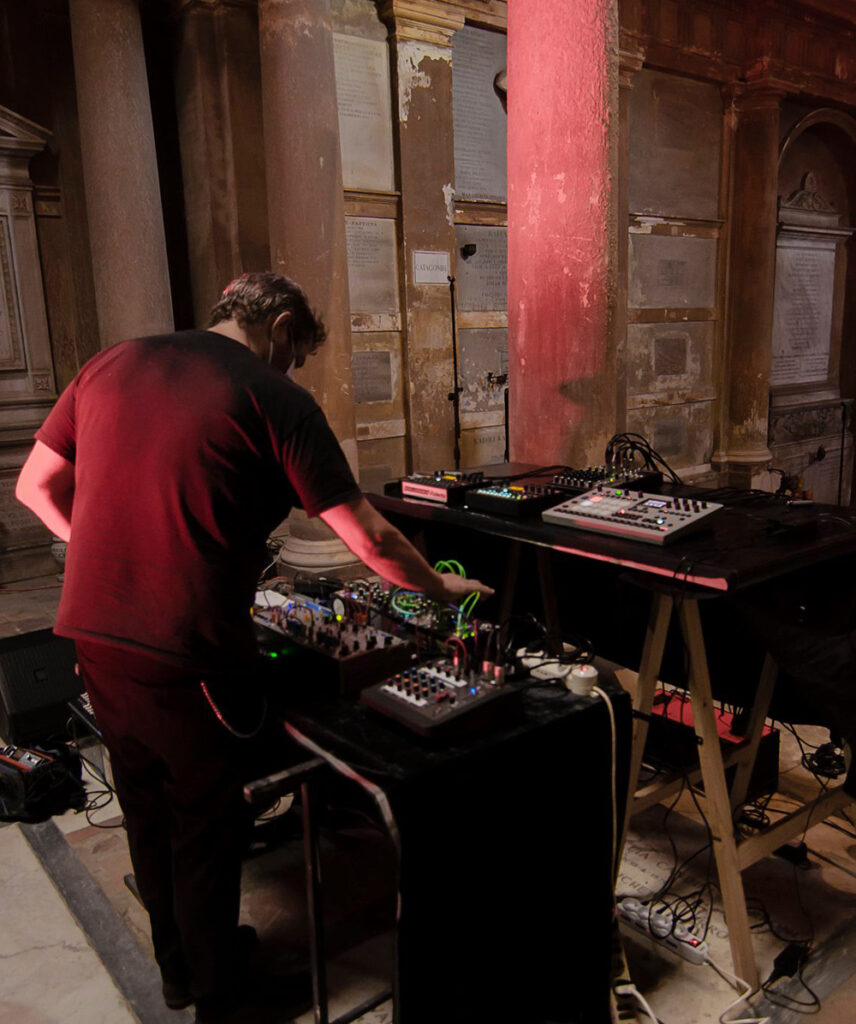