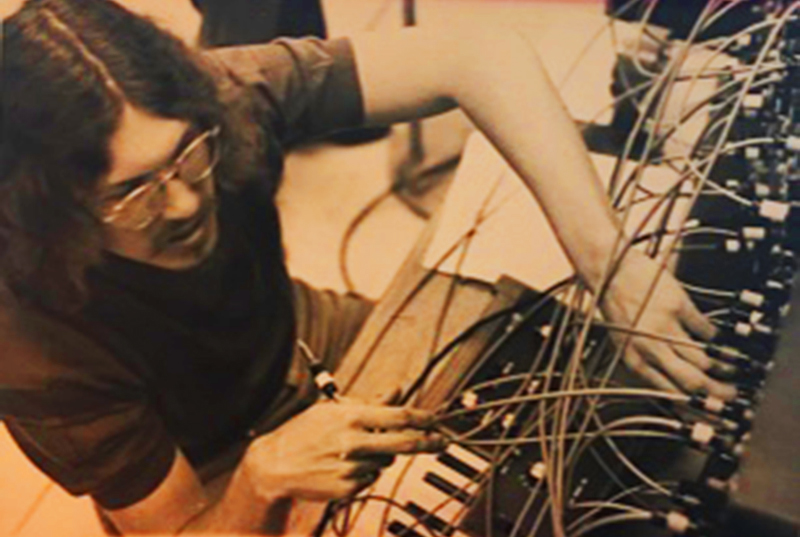 First of all I must confess feeling extremely honored to be allowed to feature those long lost recordings on a mythical original Buchla 100 analog synthesizer.
Originally from Oklahoma, Ernie Morgan had done his Masters at Mills College in Electronic music. He was in the Psych Pop group The Strawberry Alarm Clock. He then came to UCSD in 1971 and worked with the Buchla synthesizer there, as well as playing saxophone, and studying composition with several people there. He worked with Pauline Oliveros and Roger Reynolds, and even collaborated as WEB trio along with Bruce Rittenbach and Warren Burt…
In 2021 Warren Burt sent his music to me with this introduction:

About 2 and 1/2 years ago, I received an inquiry from my website.
It was from a woman named Mary Morgan, and she said she was the widow of Ernie Morgan, who had just passed away. As Ernie was a veteran surfer, I wasn’t surprised when she told me that Ernie had had a heart attack while surfing and died on his board. She said that she had gotten in touch with me because Ernie had told her that only “The Scarlet Aardvark” would understand the music he made with synthesizers when he was at UCSD from 1971-74 and 75.
She had done a websearch for “The Scarlet Aardvark” and came up with my name and website (I wonder if Bruce Wayne or Clark Kent has this problem…) and was wondering, was I the aforementioned Scarlet Aardvark and did I know Ernie?!

Originally from Oklahoma, he had done his Masters at Mills College in electronic music. Maggie Payne remembers him well. He then came to UCSD in 1971 and worked with the Buchla synthesizer there, as well as playing saxophone, and studying composition with several people there – I believe he worked with Pauline Oliveros and maybe Roger Reynolds. I thought Ernie was a very good composer and we even collaborated as WEB trio along with Bruce Rittenbach…
Some teachers on the faculty didn’t like Ernie’s musical vision, and I think it was in late 1974 that he left the program – I’m not sure of the details at this distance, but he wasn’t happy – he might have failed his oral exams, but again, I can’t remember. In any case, apparently, he went home and took all his reel to reel tapes and made a wooden box, and put them in the box and nailed the box shut and for him, that was the end of his involvement with new music or electronics. He later taught elementary school for many years in North San Diego County and also played with The Strawberry Alarm Clock. Time passes.
Ernie is 71 in 2016. He is a dedicated surfer, and while surfing off Oceanside, California, had a heart attack and died.

Mary wondered if I would like to have the reel to reel tapes, to see if there was anything of interest on them. 3 large cardboard boxes with reel to reel tapes and photos and programs from UCSD came in. The programs alone are a treasure trove of memories. She also sent me $1000, which I used to pay Melbourne engineer Michael Hewes to transcribe the tapes to digital. While transcribing the tapes, Michael is very impressed by them. I had a
listen, and after 45 years, I, too, was most impressed. I had remembered that Ernie’s electronic music was highly valued by myself and a few other colleagues at UCSD, but the stuff was indeed exceptional. I had also communicated with John Bisch off and Maggie Payne, of Mills College, who both knew Ernie in his Mills days, and both remembered him fondly and said they had very good memories of his music. One of the pieces was especially impressive: “Beginning IIb was from For Sea, and Ever Shall”. This is about 80 minutes long and it’s from I think 1974, and was, I think, to be one of the pieces for Ernie’s PhD. It was made on the Buchla (a 12 panel system designed by Robert Erickson) at UCSD, I think, although maybe Ernie mixed in some stuff made on the Moog there, or other synthesizers. But I think it’s mostly Buchla.
I have added a couple others, mostly shorter, but also using the B100, so here is a treasure trove of previously unknown Buchla work from both the Mills College and UCSD studios for you to enjoy.

Beginning IIB from was 4 Sea, and Ever Shall

Repeating loops which continually change tempi and changing timbres as well. A sense of endless variation, yet also a sense of constancy – and then, over time, the ranges of change, as do the kinds of timbre changes. You think it’s going nowhere, and then, unexpectedly, it does change. And then the earlier repetitions, or fragments of them, do come back in, if only for a moment.
I get the sense that a kind of repeating pattern is manually controlled, and the tempos are irregularly changing, following both a kind of regular logic and a kind of irregular repetition. And after a while, the kinds of repetitions do change, both for longer and shorter times. Best maybe to not follow the changes exactly, but instead to drift with the changes as they change both in short-term changes, and with more long-scale changes.
One of Ernie’s recurring titles for a series of pieces of his was “Mono-Melodies.” These sort of monophonic melodies, which also change tempi over a very wide range, provide interesting varieties of gesture and texture – yet they always seem to return to varying kinds of repeating melodies. It’s a long piece – 77 minutes (here appearing in 2 parts because of BC size restrictions), but it seems to go a lot faster than that. This piece was written by Ernie as one of the portfolio of pieces for his PhD.
It’s been one of my favorite pieces of his since I first heard it back around 1973.

These two pieces seem to be structurally related. I get the feeling that one melodic and timbral sequence is used in two ways – with two signals intermodulating each other, you get two variations – A modulating B and B modulating A from one set of material. This, of course, might be too simple a description – Ernie seems to be having lots of variations of change in his material. But the range of variations is fairly wide. And both pieces seem to be in two sections. So in addition to all sorts of short-time-scale changes, there seem to be two larger scale sections in each.
These kind of structural changes seem to be one way that he seems to build larger structures into his material.
A combination of changing kinds of materials with repeating (or semi-repeating) riffs. Listening in a curious way: how ARE the materials changing and yet not-changing but repeating?
As John Cage said, “We give exact attention.” 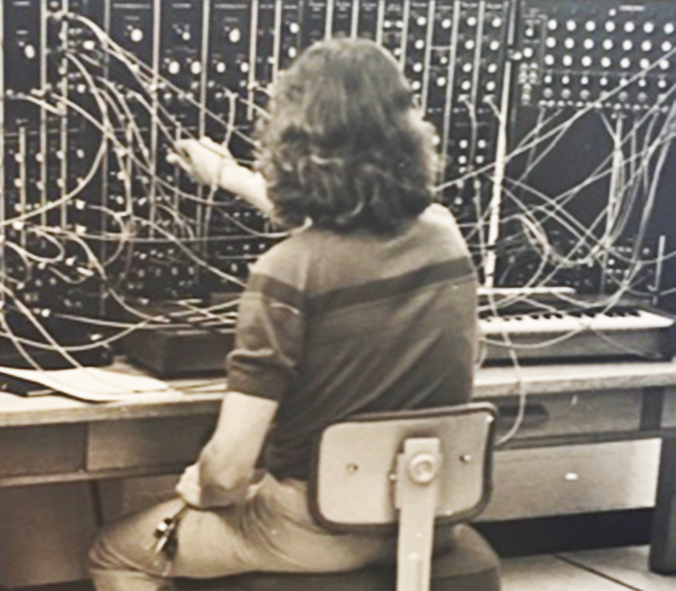