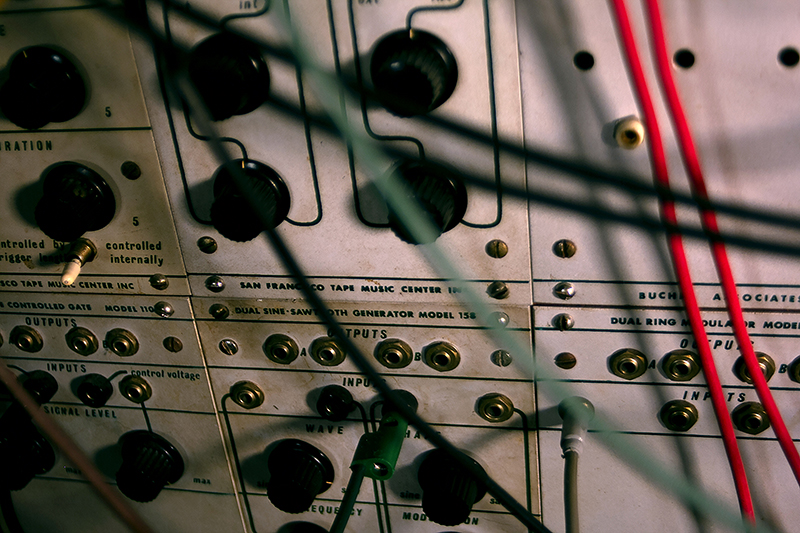 Reciprocess is a series featuring the work(s) of sound-designers and documenting the process of musical reciprocality between them, this time offering an historical recording from 1972, played on an original Buchla 100 analog synthesizer by Ernie Morgan, Bruce Rittenbach, and Warren Burt.

It was in the northern autumn of 1972. I was starting my second year at University of California, San Diego as a post graduate student. One of the classes I was going to take, and I was looking forward to it, was a class in live-electronic performance, given by Pauline Oliveros. I remember that the first thing Pauline did was to give us a patch which consisted of one oscillator modulating another. That was it – just one oscillator with its frequency modulating another oscillator. The instruction was to turn the frequency knob of the modulating oscillator as slowly as possible, and listen to the result. That is, really listen to it – listen to how slowly it changed, and what all the aspects of the modulating sound was. It was one of the most profound music lessons in my life. As I remember, there were about five people in the class, all males, but such was the respect that all of us had for Pauline, that issues of gender didn’t surface in the class. I don’t remember everyone who was in the class, but I do remember that three of us were myself, Ernie Morgan and Bruce Rittenbach.
We all had a substantial history of doing live electronic performance. The department had a large Buchla system – 4 wooden framed boxes each with at least one touch-sensitive keyboard sequencer attached to each box. Apparently, although I didn’t know this at the time, the specification of modules of the Buchla was made by Robert Erickson. He used the system for two pieces – one called “Roddy” which also used the sounds of aluminum rods he made, and one called “Birdland” which used the sounds of the Buchla oscillators. Then, apparently, he didn’t use it any more. This of course, could be wrong. His archive might have treasures in it we don’t know about. 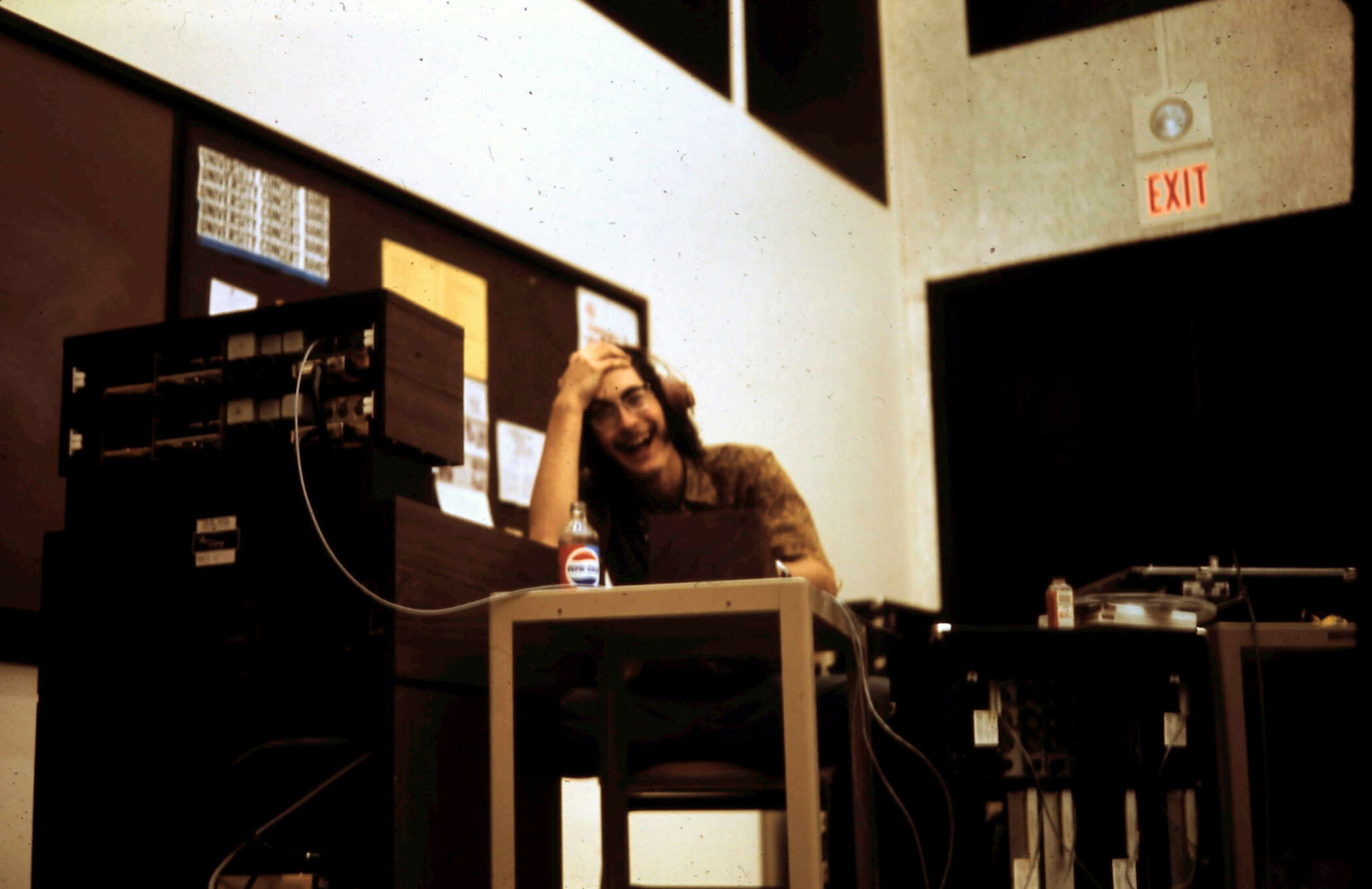 We decided that we were going to do a trio performance. Each person had at least the modules in one box and a sequencer-keyboard and each person had an input into a tape delay system. We each had a track-record of doing new music performance as well. I already had done a lot of performance and composing, especially with the large Moog system, designed by Joel Chadabe, at the State University of New York at Albany. Ernie had graduated with a Masters Degree from Mills College, and was known for doing very long performances with either the Mills College Buchla or the Mills College Moog.
Ernie’s Masters thesis – on his piece “Plato’s Pup” is full of patch diagrams that Ernie had made for the Mills College Moog system – in the thesis he describes getting permission from Robert Ashley to use that system. He also did a number of pieces with the Mills College Buchla system, which, by the way, was the original serial number 1, Buchla System made by Don Buchla for Pauline Oliveros, Mort Subotnick and Ramon Sender. These recordings are documented in Modulisme Session 060.

Bruce Rittenbach was not only an electronic composer and performer, he was also a vocalist – and a key member of Kenneth Gaburo’s New Music Choral Ensemble III. You can still hear his performance as one of the seven singers in Gaburo’s Maledetto, on the original CRI recording from 1971, I think it was.
I would say that Bruce was the most electronically accomplished of us. He was designing modules not only for himself, but also for Pauline Oliveros, and eventually, his modules under his label of “Sonic Research Associates” were eventually incorporated into the analog system that he assembled for the studio at the Center for Music Experiment – CME. As I remember, his oscillators featured great stability and fine tuning, something that not all systems possessed at the time.

So we had the four box Buchla divided up into three systems – I don’t remember how it was but I remember we each had enough oscillators, filters, and a touch-keyboard to be self sufficient in our playing. We also had the output of our individual oscillators going into mixers of a tape-delay system, so that each of us could have our sounds delayed to feed back into the mix. I do remember that we each had a section where we would play kind of solo while the others played accompaniment patterns, and we would also have sections where we all played together. The parts would go into the delay, providing further thickening of the sonic texture. 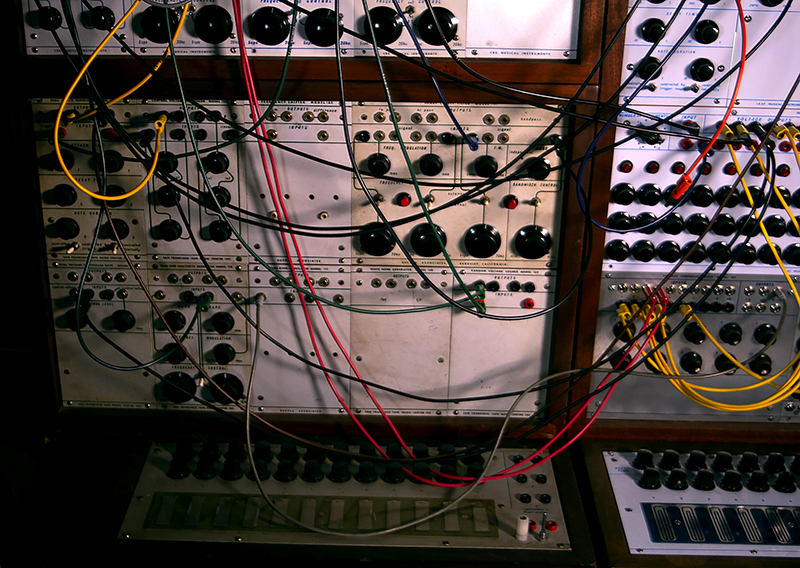 We had a tape recorder on stage, recording everything, and acting as the delay tape. We also had a technician in the sound booth further recording everything that happened. We played for about 80 minutes. For some reason, the recorder on-stage malfunctioned and the recording it made was completely out of balance. However, the recorder in the sound booth worked fine, although that recorder ran out of tape before the piece ended. By the time the technician got the recorder re-loaded with tape, a good length of time had passed, and so, like Richard Nixon’s Watergate Tapes, there was a missing gap.
What we now have is the first section of the piece, and the last section, with a bit in the middle unrecorded. The total length of time is about 50 minutes. Still, it is enough of a document on its own to constitute a working version of the piece.

Ernie Morgan passed away in 2016, while surfing. Bruce Rittenbach, after a successful career as an electronic designer, retired recently. In my papers I have a poster for another concert that Bruce and I gave together sometime the next year. I can’t remember anything about that concert, and I don’t have any recordings of it. But this piece, called “Web” – for our initials W(arren), E(rnie) and B(ruce) does exist. I remember after making this piece, we also took the delay tapes and each made an individual mix of the delay tapes, making a half-hour mix-version.
Ernie’s piece is called “First Time Out – WEB” is 15:36 in duration.
My piece was called “Spider Soup – Spider Song – Web.”
I don’t recall if Bruce made a version of the mix of the delay tapes, and if he did, what happened to it. So for the moment, this two part piece, consisting of the beginning and ending sections of the live performance, is what we have. On its own terms, it works quite well, and is a good document of the kinds of collaborative live performance with early analog electronics we were giving back in the early 1970s.
These are now all presented to you as sound sequences delayed in time. I hope you enjoy them as they come in, and out, of your consciousness.
Warren Burt / June 2021 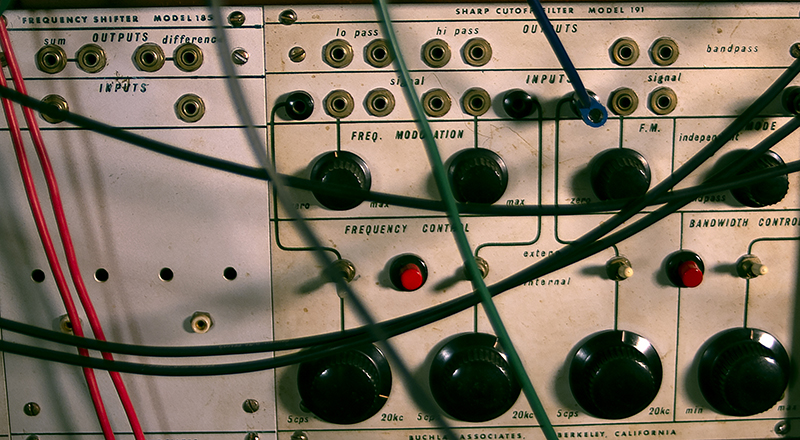