Doug Lynner is a lifelong musician whose career started as a keyboardist and guitarist in psychedelic rock bands in the 60s. In parallel he got a college degree in electronic music composition from the California Institute of the Arts where he studied with Morton Subotnick, Harold Budd, James Tenny, Leonid Hambro and Nicholis England.
He does perform internationally, host a weekly FM radio show (Bloop and Quack), teaches electronic music and music composition privately, and, host free modular synthesizer tutorial videos.

I learned of modular synthesizers in the 1960s through academic recordings, rock music, movies and the Whole Earth Catalog. 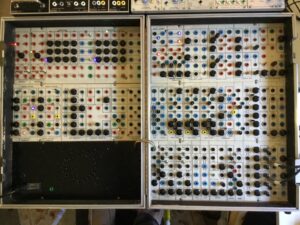 The design concepts employed in the Serge helped me to dissect the elements of sound and understand how they work together in a dynamic music world. It continued my liberation from the traditional Western music traditions.

These days that hunger is fueled by the insane number of modules available in the market. It can take a long time to explore the options and arrive at a system that supports your musical needs.
Unfortunately, most people have to make those decisions before they have matured musically and developed a compositional point of view with which to inform their module choices.
Even for mature musicians, new modules can spark new ideas just as any change of instrument influences a composers output. If you keep your compositional point of view in mind the process can be less chaotic.

I performed this special concert live in my studio in one pass on the morning of September 4, 2019 after patching the instruments the previous day.
I performed it on the Mystery Serge (an original paperface Serge), a modern Eurorack Serge realization by Elby Designs, and, a Cyndutries Zeroscillator.
I don’t dream of systems. I work with what I have. Music is my goal, not an instrument. I would be singing and knocking rocks together if that was all that I had to work with. 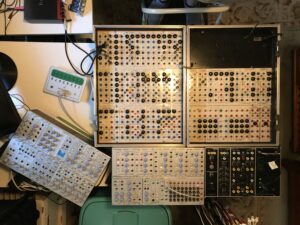 My favorite Modular player at this time is Shiro Fujioka. We are planning a recording session together this fall for an upcoming release.

Work to break through the technology ceiling so that you can concentrate on music composition. The synthesizer is not the end in itself. It is just the means to the greater end of music composition.
Work on your art every day even if it is nothing more than to listen to what you did yesterday. Keep the pump primed.
Explore the world of sound with intention and curiosity.
Don’t waste your creative currency by competing with, or talking badly about, fellow musicians and musical styles. Your success doesn’t depend on someone else’s failure.
Listen.
Create community and include everybody. 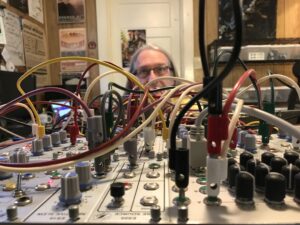