Jos Smolders started working with Philips reel to reel recorder when he was 15 years old. During the early 1980s, when he was studying at the university he got exposed to Schaeffer/Henry’s Symphonie and began researching and made his first collages and recordings. From there, things evolved. He has recorded countless albums and collaborations and since 10 years is also a mastering engineer working mainly in the field of electronic music.

Strangely enough I owned a Korg MS-10 since 1985 but I never properly understood how it worked. I just twisted the knobs until something good emerged.

Ever since the first possibilities of digital recording I have used that. Not midi (everyone was into trackers and midi at that time) but really audio and (after a few years) multitracking. I was one of the first people working with Cool Edit and then Cool Edit Pro. Then Cool Edit was sold to Adobe and I was really dissatisfied with Audition. That’s when I moved to Reaper and I have been using that ever since.

So I did everything digitally but in 2011 / 2012 I was stuck. No inspiration to do anything, just because I could do anything. I had tried all kinds of musical styles but it was all too easy. Then I found two new directions to work on: first there was starting the mastering business and secondly I met Wouter Jaspers of Koma Elektronik. This was just before he moved to Berlin. He told me I should try analog gear. I had never heard of eurorack and thought modular synths were something of the distant past.
Anyway, I got hooked (of course) and started investing in a system. I sold my complete vinyl collection to a collector and that’s when it really set off. 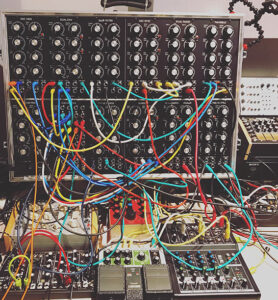 I bought my first case in 2013 and it took me a long time to get acquainted with the concept of modular . To really undersand what is happening. I bought modules and tried and then sold them to buy other ones. But in hindsight some I shouldn’t have sold. They were okay but I just wasn’t there yet, to understand what the potential was.
I tried many brands to find which ones fit with my aesthetic. Makenoise and Mutable Instruments are  my favorites. I had a lot of Cwejman’s but I don’t like them at all. I sold all of them. Lately Verbos has become a brand of interest. A few years ago I bought a Hordijk System. This is an incredible machine. Rob Hordijk is a genius. He is very musical. He understand how the various parts of the system can enhance each other. And it doesn’t matter what you want to make, either sequenced melodious music or totally abstract sound collages, that machine is incapable of producing bad sounds.
Of course I started making different music since I work with modular. That’s inevitable. In my case, the presence of field recordings has drastically decreased. It’s become more electronic. I intend to change that in the future. I have a Nebulae2 in my collection with which I can use high quality concrete sounds in a modular environment. The modular is connected to my recording system via an ES-8 on the other side of the studio.

I always look for simple patches. I am not like some others with their spaghetti draped all over his panels. This long piece is almost unedited and was recorded in 2019. The patch that I used for this particular recording was simply a Hordijk Blippoo, an O-coast, an SQ-1 sequencer, a Bugbrand PT Delay and a Roland Space Echo. So the Blippoo and the O-coast are the core and these 2 give plenty of options for rich sound coloring and crazy envelopes. This small set up I also use for live performances.

In 2021 I wanted to add a shorter work, 100% Hordijk. The idea was to juxtapose the incidental opposite something continuous.
I have been using the Hordijk for a few years now. It has become the major tool for my sound production. Just like Rob Hordijk intended it feels like a finely tuned instrument, not just a collection of modules. My workflow is such that I improvise, record, record again, listen and add new material that either supports the story of the earlier recording or starts a dialogue with it.
In contrast to the earlier large piece (which was an almost unedited live track) I submitted this track is more coherent and has a form that is easily recognizable. I used a Makenoise 0-ctrl to submit a sequence because I wanted one part of the track to have a certain groove. Just a classic groove because the Hordijk can deliver that as well. But I didn’t want that groove to be too smooth. It was smeared with dirt and hindered by the classic and typical Hordijk Krell-like interjections. Then those two sonic shapes became the main protagonists in this track. 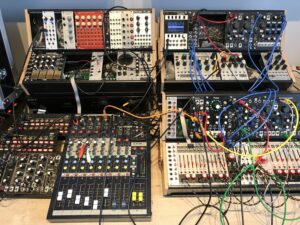 Are you feeling close to some other contemporary Modularists?
Which ones? Which pioneers in Modularism influenced you and why?

Aesthetically you could say I am oldfashioned. The early electronic masters are still the biggest inspiration for me. Many modular users go for sequenced and arpeggiated stuff. Or they produced large drones. To me the modular is an instrument to create an abstract musical structure with. I don’t see that a lot. As for contemporaries that I like the music of, that must be Valerie Vivancos, Lionel Marchetti to name a few.. My original inspiration came from Stockhausen, Henry, Mimaroglu, Ferrari, Boerman, Raaijmakers, Appleton, Cage, Tudor. It’s a long list.
I think in live sets I am most connected to Richard Scotts music. He and I use the same equipment. Richard is also closely connected to Rob Hordijk.

A piece of advice for those starting with modular?
First principle: try to get acqainted with modular through a friend or if you don’t have any modular friends: watch many many many youtube films. Then learn what is what and what you like and dislike. Then you can start buying your own stuff. Start with a small collection and know that you will buy (second hand!!) and sell a lot before you get to a set that is really yours.
In my early days, I sometimes bought a module each week. This year I have bought I think 5 modules (in 8 months). I have decided that my current set up gives me all the possibilities to produce whatever I want. 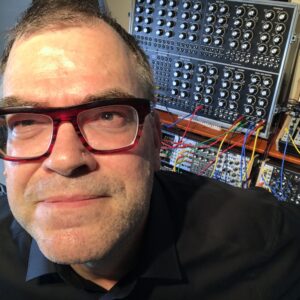